As we wait for a final result in the US election, now is the time for investors to hold their nerve until there is clarity.

Markets appear to have taken a breath as we wait for the final outcome of the US election. While we can’t rule out the possibility of volatility – especially if the uncertainty stretches beyond the weekend – Asian markets were calm as the first results were announced suggesting that investors are prepared to take it in their stride.

As we wait for the final tally, how should investors react? Our experience suggests that now is not the time for sudden decisions.

Investors waiting for clarity before moving

Investment markets had increasingly anticipated a victory for Democrat candidate Joe Biden in the last weeks of the campaign. However, it already seems clear that it will not be a landslide victory for the Democratic candidate and a victory for Trump cannot be ruled out.

“A surprise victory giving President Trump a second term will be positive for US equity markets,” says Coutts Head of Investment Strategy Sven Balzer. “Tax rises proposed by Joe Biden will be off the agenda and the possibility of further tax cuts and deregulation will be positives. The outcome is more mixed for other regions though as renewed trade conflicts could be on the horizon.”

But while we can’t ignore the possibility that one of the candidates may challenge the results in one of these states, it’s worth noting that the ultimate outcome for markets is rarely as dire – or delightful – as headlines predict. The 2016 election provides an instructive example – a Trump victory was predicted to be negative for equities, but in fact share prices rose in the following days.

Sven counsels a sceptical view: “Historically, the link between market performance and the president is not conclusive. Democrats often tout the benefits of expanded fiscal spending on the stock market, while Republicans typically argue for tax cuts and deregulation. In reality, these activities, while important, are often secondary to the prevailing economic, monetary, and market forces at the time.”

In the current climate, whoever ends up in the White House will have as a priority to combat unemployment and keep the economy supported.

With COVID-19 infection rates still elevated, the new president will need to take action to reduce its spread and mitigate the financial impact of containment measures. This will have a significant impact on market performance in the medium term.

“In the immediate term after the new president takes charge, markets will be looking at what support the government will be offering,” says Sven. “The parties in the House and the Senate have been negotiating for some time, and the scale and timing of a relief package will be significant for markets. Upcoming vaccine trial results will also be closely watched by investors after the election result is reliably known.”

US economy remains in good shape

In spite of the impact of the pandemic and the contentious election, the US economy has made significant strides in stabilising an otherwise precarious outlook. This is perhaps most evident in the recent strength of the leading indicators.

Purchasing managers indices – which survey businesses to assess how busy they expect to be in the coming month – fell sharply in April during the lockdown. But since then, the outlook for both manufacturers and non-manufacturers has bounced back and is now higher than before coronavirus took its toll. 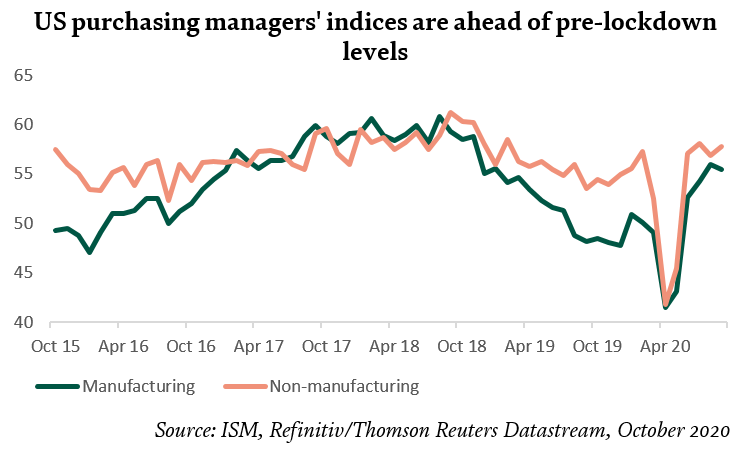 The US Conference Board Leading Economic Indicators Index is also recovering strongly after having the sharpest two-month decline in its history. It puts together 10 important economic indicators to create a broad indication of the trajectory of the economy.

After a recession, a rise of about 2.5% above the previous low usually indicates that the economy is in recovery. By the latest reading, it’s currently 9.8% above its lowest point during the lockdown. 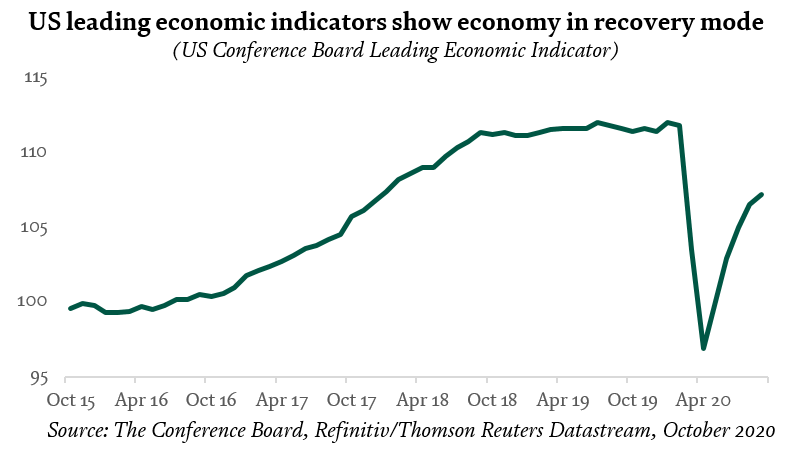 This shows that politics is not as important to the health of the economy as the underlying economic forces – companies making things, consumers buying things and people getting on with the business of living.

In this closely fought and highly contentious election, we don’t expect either party to concede without a clear result. Indicators are that results from a few key states will be decided by postal votes that could take several days to count. At this stage, we expect a final outcome to be announced within a week or less, although an extended battle – and even a resort to the courts – that leaves the outcome in doubt for an extended period remains a possibility.

We would expect some volatility over this period, and perhaps a relief rally when the matter is resolved. However, we are maintaining our positions for the time being and will continue to monitor markets as matters unfold.