Recession or depression – where are we heading?

Some commentators say the global economy is heading for a long and drawn out depression but are they right? Here’s what we think…

While the economic consequences of lockdown will be deep and profound, there are reasons to balance near-term anxieties with a more hopeful view.

There is no doubt that most economies are entering a period of recession as the shockwaves of the containment measures pass through. The International Monetary Fund currently predicts that global GDP (gross domestic product – a measure of economic activity) is likely to fall by 3% during 2020, far worse than the -1.8% drop seen in 2009.

But we don’t think any of this will translate into an extended economic depression.

Recession and depression are very different things, and understanding why will help allay some of the concerns you may have about the economic future.

A recession is characterised by an economy shrinking for at least two consecutive quarters – in other words, two consecutive quarters of negative GDP growth. Analysis by the International Monetary Fund, which includes factors outside of GDP growth, shows that there have been four global recessions since World War II – in 1975, 1982, 1991 and 2009.

A depression is deeper and longer-lasting than a recession, characterised by an extended period of high unemployment, low levels of economic activity and stunted production. There’s been only one global depression in the last century, the Great Depression of the 1930s, during which US GDP fell by 33% (from 1929 to 1933).

Recessions can be painful for many – losing your job or your business will always hurt – but the broader economy survives. A depression, on the other hand, has the potential to create unpredictable, profound and enduring damage beyond the economy.

The current recession will without doubt be very deep and wide-spread. Unemployment has risen significantly and a wide range of sectors are affected. But we think the recession will be short-lived, and that’s the key to our cautious optimism. With economic activity plunging so deeply, even a slow, partial re-opening of the economy is likely to lift activity from these extreme lows.

Of course this will only be the start of a gradual process. That’s why the government’s fiscal stimulus is so important – it needs to provide the temporary support required to enable a self-sustaining recovery.

A swoosh back to economic health

Assuming there’s no severe second wave of infections, the nature of this crisis means we’re unlikely to see a long period of economic stagnation. Instead we should see an extended tick or swoosh-shaped recovery as the world processes the economic impact of the lockdown. 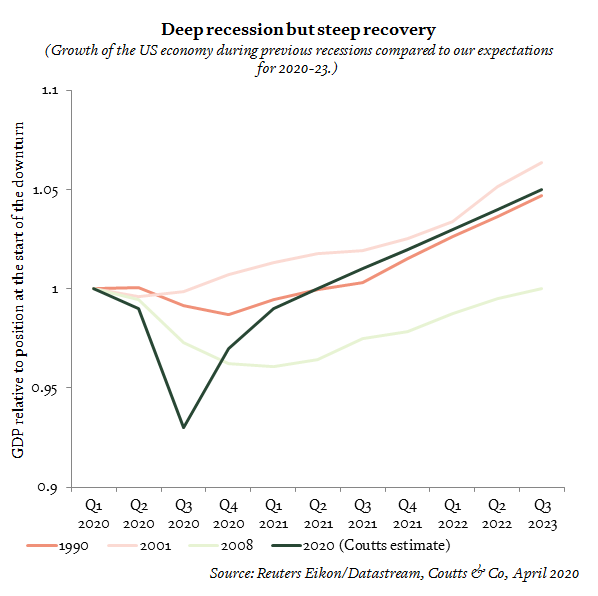 As the medical crisis is brought to heel, we believe we will see a steady improvement in the economic backdrop. While the collapse in economic data has been dramatic, there aren’t any deep-seated systemic problems standing in the way of a recovery. In 2008, for example, there were severe dislocations in the financial system that had to be corrected before things started improving – that’s not the case today.

Markets tend to bounce back from big falls

In the last few weeks we’ve seen some recovery in equity markets. The S&P 500 is up around 13% in dollar terms over April while the MSCI UK Index is up around 3%, indicating that investors are starting to feel more confident. It’s early days, and we expect further ups and downs between now and the end of the current crisis, but this shows that investors are still seeing long-term potential in equities.

And they have history on their side, as markets tend to bounce back from big market falls in the longer term. The table below shows how UK equities performed in the months after the biggest downturns of the last 30 years. After 12 months, investors in UK companies made an average gain of 10%. After three years the patient investor would be over 30% ahead. And after five years, the very patient investor would, on average, have gained over 60%.

It’s worth remembering, however, that this average includes wide variations, and of course past performance is not a guide to future returns.

The value of understanding history and looking to the future

Market falls like we have seen in March can be intimidating. If you have invested for the first time in January this year, you have every justification to feel nervous about the current situation.

While investing can be an emotional experience in the short run, our expertise, and analysis of up-to-the-minute economic data, allows us to form a disciplined and robust assessment of the situation.

Above all else, a diversified portfolio of assets, actively invested in different markets and across various asset types, has the potential to help you ride out the ups and downs of even the most extreme events.

A downturn in the tech sector

2 min read
Our views on three top-of-mind investment topics. This month, inflation (what else?), encouraging signs from China and how we’re positioning our client portfolios and funds.
Read more
2 min read
Investments
|

ESG moves up energy agenda thanks to investor pressure

3 min read
Coutts and other investors in some of the world’s largest energy companies are bringing environmental concerns to bear, gearing up the hydrocarbon giants’ transition to net zero
Read more
3 min read