China crisis could divide the world

The US and China have been on a collision course for some time, and their conflict could have big ramifications for investors.

We’ve previously considered China’s increasing importance in the global economy in our article Growth Markets: Why China Matters. But the growing divide between the US and China over recent months has caught investors’ attention, and for very good reason.

A battle that could batter markets

The US and China are the world’s two biggest economies, representing nearly 40% of total global economic output, as represented by gross domestic product (GDP). 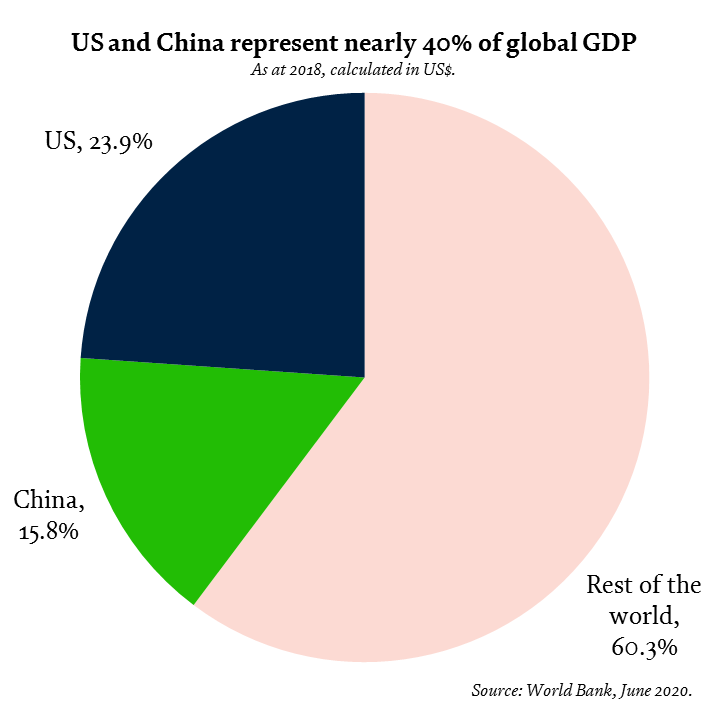 A smooth relationship between the two powerhouses provides a steady backdrop for global trade, which is helpful for company profits and equity markets. A rocky relationship, however, could put pressure on supply chains for large manufacturers, increasing prices for consumers and potentially eating into corporate profits.

The US economy will drive what happens next

Investors responded positively to the warm words spoken by both sides when the ‘Phase 1’ trade deal between the US and China was first announced at the end of 2019, but this early optimism now seems misplaced.

Coutts Investment Strategist Joe Aylott highlights the deficiencies of the deal. “The ‘Phase 1’ deal was a step forward, but a lot of the thornier issues were left for Phase 2,” he says. “Detailed measures on intellectual property theft and the role of the state in Chinese businesses, for example, are key issues for the US but remain unresolved.”

As the US election draws near, President Trump could seek to use the conflict with China as political capital. Already, he has taken a belligerent stance on coronavirus, all but blaming the outbreak on China. Faced with a faltering economy in the face of recent lockdown measures, he could see an electoral advantage in amplifying his position as a strong man, which could further aggravate the situation in the short term and lead to diplomatic difficulty over the long term.

Joe warns that this could spell trouble for markets: “It would be bad for growth in China, and therefore bad for global growth. Emerging markets are likely to be particularly hard hit. In the short term, we could see rising equity market volatility and resurgence for traditional safe havens, like government bonds and precious metals.”

No short-term solution to geopolitical rivalry

This problem has been a long time coming and will continue to be an issue after the US election. Over the last decade, Chinese companies have expanded rapidly, challenging the dominance of the US. 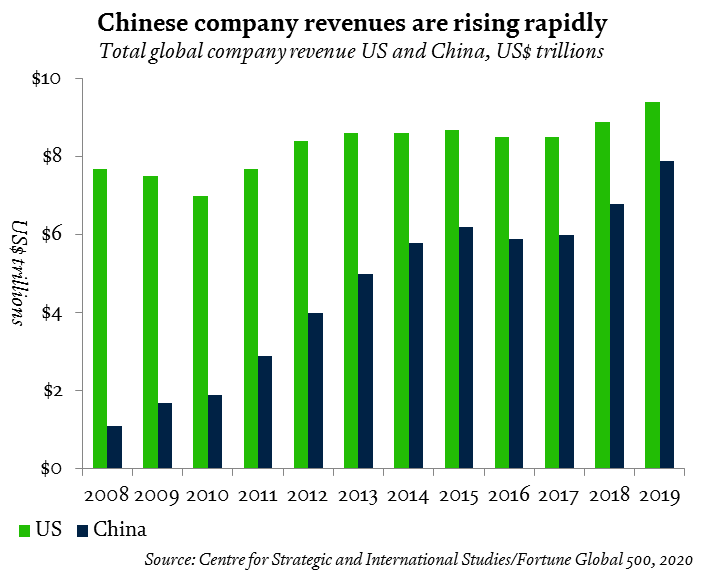 In addition, the US-China trade deficit has grown substantially in China’s favour over the last three decades, further fuelling President Trump’s anti-China narrative. In 1990, imports from China exceeded exports by US$10.4 billion; in 2019 the deficit had risen to US$345.2 billion.

China’s growing economic clout has been a concern for both sides of the US political divide. Joe observes, “There’s broad bipartisan agreement amongst both Republicans and Democrats that US and Chinese interests are not aligned. Polling by the Pew Research Centre shows that, in April 2020, 66% of the US population had an unfavourable view of China. This will be a big factor in the relationship going forward, and other nations are going to be under pressure to pick sides.”

A decrease in global trade could see an increase in prices

As we highlighted in our Annual Investment Outlook, global trade has been declining since a boom in the 1990s. Having seen local economies suffer as manufacturing bases shift offshore, some countries are promoting local industry again to sustain jobs – through subsidies and tariffs.

This will put upwards pressure on prices. Joe explains, “Globalisation is widely acknowledged as a powerful disinflationary force over the last two decades. Increased competition in labour costs and accessibility of international markets have driven prices down everywhere. As trade barriers go up, prices could rise in key consumer sectors, particularly phones and personal electronics – the end of the cheap upgrade could see a seismic shift in consumer behaviour.”

This won’t be immediate. But over the coming years geopolitical pressure could force multinationals to consider their supply chain reliance on China, which will be an inflationary force for the global economy.

Higher inflation will have knock-on effects for global bond markets. It erodes the value of long-term bonds, and adds to difficulties for investors looking for income. Equities tend to fare better – as they can pass price rises on to customers – but rapidly rising prices could limit consumer demand.

It’s important to plan for a changing world

As an investor, the only certain bet is that things will change. Keeping abreast of long-term trends is one of the vital disciplines at the heart of our investment process. This, along with other things like diversification, help us to position our clients’ investments to take advantage of the opportunities that shifting macro-economic tides can bring, while potentially shielding them from possible pitfalls.

Similarly, making sure you have a sound long-term financial plan in place will help you achieve your aspirations for yourself, your family and the causes you care about. If you would like to discuss the role investing could play in your plans, please contact your private banker who can help you understand your options.

3 min read
A list of the most exciting and entertaining books, compiled by our Coutts family
Read more
3 min read
Investments
|

5 min read
Early stage companies have had to move quickly to survive the sudden drying up of cash flow, but there are opportunities for those with the foresight to adapt.
Read more
5 min read
Lifestyle
|

How long does it take to make a vaccine?

2 min read
How long does it take to make a vaccine?
Read more
2 min read