With inflation reaching record levels on both sides of the Atlantic, Coutts Head of Asset Allocation Lilian Chovin takes a deep dive into what it means for investors.

How did we get here?

To understand the outlook for inflation, it’s important to understand the drivers, which include government policy, shifts in consumption patterns, and labour market changes. The pandemic has had profound impacts on the global economy, and some will be persistent. In this article we will focus primarily on the US. And while the specifics of different regions vary, the main drivers and developments are very similar in most western economies.

Firstly, authorities’ response to the pandemic has had a significant inflationary impact. Governments in most developed countries either backstopped private sector wages via furlough schemes, or in the case of the US, boosted unemployment benefits to protect consumers. And meanwhile, low interest rates and quantitative easing have increased asset prices.

Secondly, the pandemic saw an unprecedented shift in consumer spending from services to goods. This put additional pressure on goods supply chains, which were also severely strained by the pandemic due to shutdowns and a spike in shipping costs, resulting in rising prices. 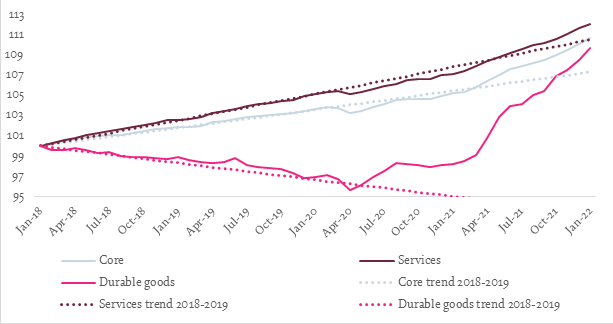 Current inflation pressures have led to a significant shift in the stance of central banks. Expectations for central bank rate hikes this year are very high, with the Bank of England rate expected to approach 2.6% by the end of the year – the highest level since 2008.

However, the negative impact it will have on consumer demand will also likely accelerate the speed at which inflation comes down once it has peaked. A return to normal for the current, large imbalance between the demand for goods and services, should continue as the world moves past the pandemic.

The labour market, though still tight, is also showing signs of improvement, while US and UK wage inflation has eased in recent months.Importantly for the US central bank the Federal Reserve (the Fed), consumer inflation expectations have not become de-anchored, and market expectations for US inflation over the next 10 years are now below the level they started the year at, despite a large rise when the Russia/Ukraine situation shifted expectations higher.

So, while inflation is likely to settle at higher levels than we have become accustomed to in the last decade, we don’t expect current levels, which are inconsistent with healthy economic growth, to be sustained. Four consecutive months of actual US CPI topping estimates highlight how difficult it is to predict inflation over the short term. Nevertheless, we continue to believe inflation is in the process of peaking, something that should become more evident in the coming months as the lower demand resulting from the economic slowdown dominates supply driven issues.

So far this year, bonds have been far more sensitive to inflation than economic growth. They will ultimately stabilise when data shows that the peak of the inflation pressures is behind us. Therefore, the outlook for the next few months is very dependent on upcoming inflation data, in particular evidence that price rises are starting to decline. While central bankers will not soften their language immediately, when they do, it will help to stabilise markets and in particular fixed income assets in our portfolios.

The value of investments, and the income from them, can fall as well as rise and you may not get back what you put in. Past performance should not be taken as a guide to future performance. You should continue to hold cash for your short-term needs.

The golden rules to retirement planning: Where there’s a will there’s a way