Russia’s invasion of Ukraine and the ongoing rise in inflation have unsettled financial markets around the world.

Without a doubt Russia’s invasion of Ukraine at the end of February rattled markets. The tragic human cost of that invasion continues to dominate headlines and people’s concerns, along with a sense that the world is seeing its biggest political shift since 1989. Looking purely at financial markets, January’s optimism has turned into a mix of uncertainty and volatility, even though the economic data remains stable.

Markets reacted fast to the large-scale invasion. Stock markets fell by up to 4 per cent on the news, and the oil price rose to well over $100 a barrel, reaching an eight-year high. Government bonds, meanwhile, provided some relative stability compared to riskier assets.

For investors, pre-existing concerns about high inflation and central bank interest rate rises were compounded by these events.

Sven Balzer, Head of Investment Strategy at Coutts, said: “Price swings in some assets are breath-taking and driven by daily news. But in time markets will re-concentrate on the broader economic picture and corporate fundamentals.

“So far companies are reporting solid earnings and economic growth continues – albeit at a slower pace – while recent economic data was mostly better than anticipated.”

He added: “The market falls have improved valuations and investor sentiment has deteriorated, so this correction is probably already well advanced. Markets will remain choppy for the time being though.”

Once again, the rate of inflation made headlines as it reached a 40-year high in the US of 7.9% in the year to February.

In the UK things aren’t far behind, with annual price rises soaring to a 30-year high of 5.5% in January – with expectations of a peak of around 7% in April when the regulator’s price cap on energy tariffs increases. However, this could go as high as 8% if energy costs remain elevated.

Central banks had already started to increase interest rates in an effort to manage inflation, and financial markets have been readjusting to expectations of tighter monetary policy over the rest of this year and beyond. In March, the US Federal Reserve raised interest rates for the first time since 2018 – to a range of 0.25% to 0.5% – and the Bank of England raised rates to 0.75% from 0.5%.

Although inflation could continue to spike higher over the next few months, we still believe it will begin to fall as the year progresses.

RUSSIA DISRUPTS THE WORLD ORDER, BUT FOR HOW LONG?

The rapid oil price rise brought on by Russia’s invasion of Ukraine has increased inflationary pressures even further in the short term. Russia is the world’s third-largest producer of oil and second-largest producer of natural gas, so trade disruptions and increased sanctions will have a knock-on effect on prices.

Similarly, food prices could rise, with Russia and Ukraine significant global exporters of both wheat and corn. This creates a challenging inflation environment and a tricky situation for central banks.

Higher prices tend to depress economic activity – people find themselves with less to spend – but central banks want to keep economies growing while bringing inflation down.

Sven said: “As the year progresses the discussion may increasingly shift from inflation to economic growth and, as a result, central banks may not increase interest rates as quickly as initially thought.”

STAY FOCUSED ON THE LONG TERM

The outlook is volatile and news driven. In terms of our investments for clients, our portfolios were positioned to mitigate market volatility before Russia’s invasion.

Changes we had already made include:

Our portfolios had almost zero exposure to Russian assets, but our recent performance reflects the broad market declines. Even so, our Balanced and Growth mandates remain ahead of or in line with competitors over three and five years.

The portfolio performance shown below is net, so has fees and charges deducted, while the benchmark performance is gross with no such deductions. 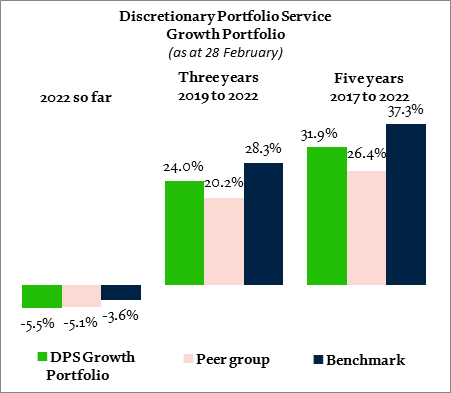 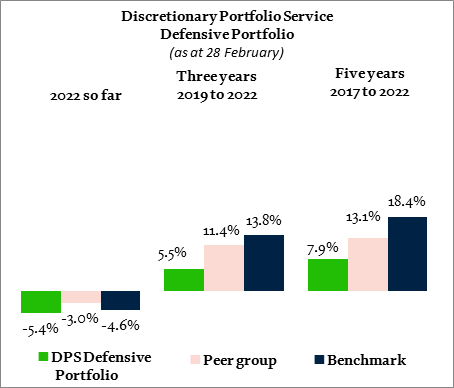 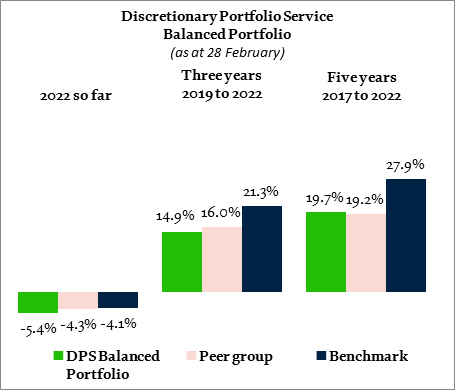 Cumulative returns calculated on sterling basis, including fees, charges and income to 28 February 2022. These data are based on composite performance, individual portfolio monthly returns are asset-weighted based on their respective asset values at the beginning of the month. Peer group returns provided by Asset Risk Consultants (ARC); end-February data represents ARC estimate. Benchmarks represent a static mix of equities and bonds in proportions relevant to each strategy. Past performance should not be taken as a guide to future performance. The value of investments, and the income from them, can go down as well as up and you may not recover the amount of your original investment. You should continue to hold cash for your short term goals. Sources: Coutts & Co, ARC. March 2022.

Coutts clients can see all our latest insight into Russia’s invasion of Ukraine and what it means for investors at our new online hub. Speak to your private banker to get access or watch out for regular updates on our 440 app.

Return data for funds are calculated net of fees, in sterling and assumes reinvestment of dividends. Past performance should not be taken as a guide to future performance. Peer group returns provided by Asset Risk Consultants (ARC). Benchmarks represent a static mix of equities and bonds in proportions relevant to each strategy. The value of investments, and the income you get from them, can go down as well as up, and you may not recover the amount of your original investment. Source: Coutts & Co., Asset Risk Consultants (ARC), Morningstar, Refinitiv, March 2022.

time to travel as adventure returns

4 min read
Following three years of rolling restrictions, what’s the best way to reconnect with your adventurous side? We spoke to two luxury travel brands about what travellers can look forward to in 2023 and the exclusive offers Coutts clients can enjoy.
Read more
4 min read
Client Focus
|

five ways to build your network via the coutts 440 app

2 min read
How to get the most out of our exclusive app for clients.
Read more
2 min read