Our latest investment update sees markets in rude health as vaccinations and consumer spending grow and economies open up.

The stock market rise that began in 2020 as economies recovered from the pandemic continued in June despite inflation concerns and supply chain shortages.

As the post-pandemic recovery matures, we’re likely to see increased market volatility and more moderate economic growth. But we expect conditions to remain broadly supportive for investors into 2022.

Strong central bank and government support and successful vaccination programmes are chiefly to thank for the recovery so far. In the three months to the end of June, markets in the US, UK and across Europe showed the most momentum, while Japan and Asia struggled with rising Covid infections and slow vaccination progress.

POSITIVE PROJECTIONS FOR THE COMING MONTHs

Here’s just some of the evidence we’re seeing of sound economic growth:

Sven Balzer, Head of Investment Strategy at Coutts, says: “So far 2021 has been a very good year for economies and markets in the US and Europe. The shift into a more mature phase of a post-recession recovery usually introduces some volatility, but the data still points to positive stock market performance into next year.”

Turning to any possible challenges, he added: “A lot of the good news is now in the price and discounted by investors. This increases the risks of setbacks if developments don’t match expectations. Risks include higher inflation surprises, changes in central bank policy and continued supply chain issues.”

The economic recovery means our clients’ balanced and growth portfolios have continued to deliver positive returns so far this year, outperforming their benchmarks. Our defensive mandates are flat across the year so far, with positive returns in the second quarter after a challenging start to 2021.

The portfolio performance shown below is net, so has fees and charges deducted, while the benchmark performance is gross with no such deductions. 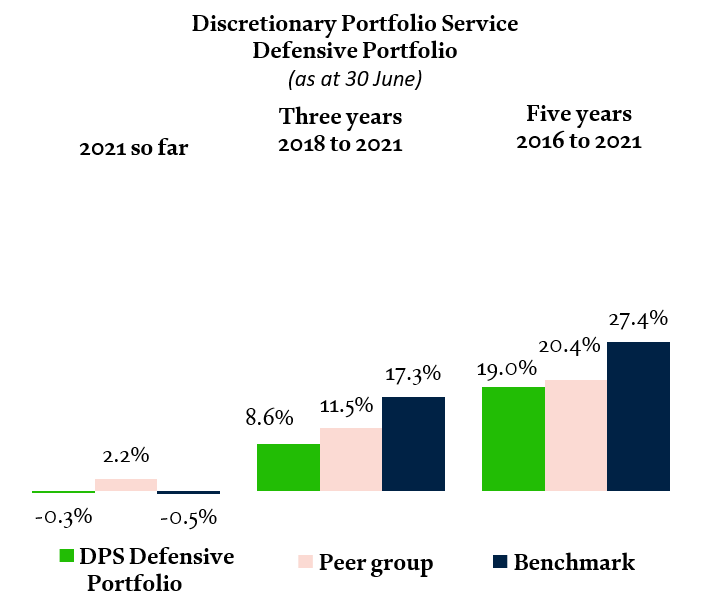 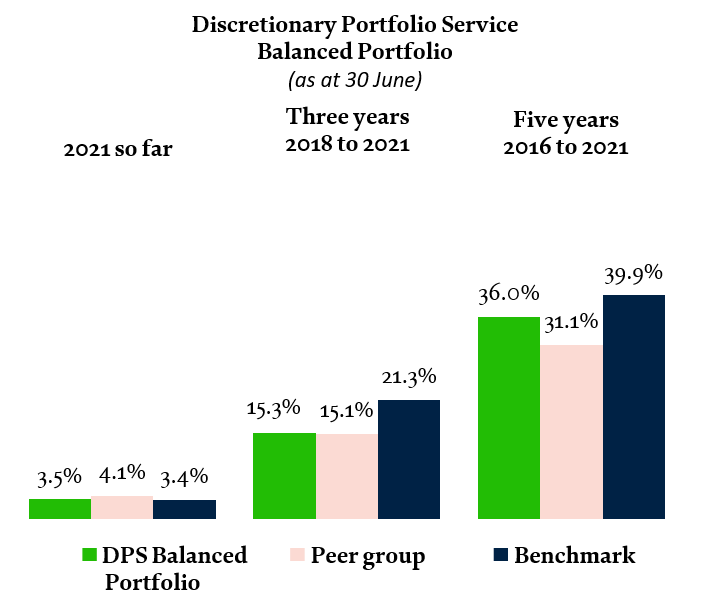 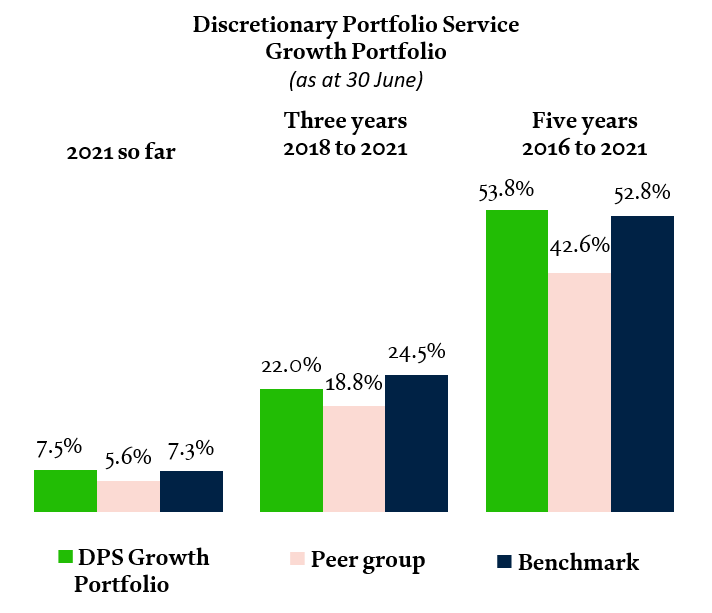 Cumulative returns calculated on sterling basis, including fees, charges and income to 30 June 2021. The data is based on composite performance, individual portfolio monthly returns are asset-weighted based on their respective asset values at the beginning of the month. Peer group returns provided by Asset Risk Consultants (ARC); end-June data represents ARC estimate. Benchmarks represent a static mix of equities and bonds in proportions relevant to each strategy. Past performance should not be taken as a guide to future performance. The value of investments, and the income from them, can go down as well as up and you may not recover the amount of your original investment. Sources: Coutts & Co, ARC. July 2021.

US inflation shot up by 5% in the 12 months to May, its largest increase since August 2008, according to the US Bureau of Labor Statistics. And in the UK, the Office for National Statistics said inflation jumped in the same period to its highest level for almost two years, 2.1%.

Investors worry about rising inflation because it can lead to higher interest rates which make it more expensive for companies and consumers to borrow and spend.

But the US Federal Reserve (Fed) and Bank of England (BoE) put minds at rest by saying many of the price rises were most likely temporary, and maintaining supportive policies. Bond returns were positive in June as a result because markets moderated their future inflation expectations.

Sven notes, however, that the Fed has become “slightly more hawkish”.

“Its members raised the prospect of paring back their market-supporting measures and warned that inflation could become ‘higher and more persistent’ than expected,” he says. “The central bank now expects two rate hikes some time in 2023, up from no rate hikes just three months ago.

“The verdict on inflation is still out. Once unemployment has declined, some of the temporary inflation effects may stay higher for longer in 2022. But we don’t expect any sudden, imminent policy changes because authorities around the world would be reluctant to derail the economic recovery.”

“The data still points to positive stock market performance into next year.”

Healthcare has been a solid performer for investors in June – a sign that we’re in a more mature stage of the economic recovery. The relevant companies tend to deliver decent returns as the economy moves from recovery to steady growth, partly because of their predictable earnings.

Our increased investment in healthcare in May reflects all these factors. We also liked the contrarian aspect of the investment as many investors concentrated on other sectors. This meant healthcare offered an attractive price having underperformed the S&P 500 over the previous year.

We won two more awards in June for our work putting sustainability front and centre of our investment process.

Just the month before, we also won Best Wealth Manager, UK for ESG at the WealthBriefing European Awards 2021.

Find out more about responsible investing at Coutts

OUR VIEW OF THE WORLD

As we’re halfway through the year, we thought it a good time to share where we currently stand on key economies around the world, and our latest investment house view. If you’re a Coutts client and would like to discuss any of this in more detail, please contact your private banker.

Return data for funds are calculated net of fees, in sterling and assumes reinvestment of dividends. Past performance should not be taken as a guide to future performance. Peer group returns provided by Asset Risk Consultants (ARC). Benchmarks represent a static mix of equities and bonds in proportions relevant to each strategy.  The value of investments, and the income you get from them, can go down as well as up, and you may not recover the amount of your original investment. Source: Coutts & Co., Asset Risk Consultants (ARC), Morningstar, Reuters/Eikon Datastream, July 2021.

Is now a good time to back British Businesses?