Inflation is here…. In the US we’ve seen inflation reach over 5%, up from just above 1% six months ago, while in the UK, we’re now pushing above the recommended 2%. In contrast, official interest rates in the major economies are either close to zero, or even negative in the eurozone.

For some, this is the chickens coming home to roost after a decade of unprecedented central bank financing following the Great Financial Crisis (GFC), which predominantly took the form of quantitative easing (QE). For us this is not the case. We believe inflation lies less in QE and more in the huge budgetary expansion policy that we are seeing to counter the pandemic. This is most marked in the stimulus provided by governments on both sides of the Atlantic, including true “helicopter money” via direct transfers in the US and UK via the Furlough and Job Support Schemes.

Our view is clear: we side with the central banks, predicting that once the impact of these polices has been worked through and supply bottle necks improve, inflation will likely fade – something we recently wrote about here.

So, that explains why we’re seeing inflation now, but as prices rise in 2021 it’s worth digging a little deeper to get a better understanding of the relationship between interest rates and inflation, to help investors manage their expectations from cash. For any investor today the question at the heart of this is “Why didn’t money printing (QE) create inflation?”

To answer this, we need to address three linear questions:

Firstly: why QE did not cause inflation?

The numbers are vast. For example, in the UK, the Bank of England has bought around £900 billion of government bonds (gilts) and £20 billion of corporate bonds since 2008. The best way of comprehending this is to follow the flow of money: the Bank of England instructs a broker to buy gilts in the market, typically from a pension fund, which drives the price of these bonds up. The pension fund replaces the gilts with another asset (an increase in the value of a bond will typically mean a drop in the yield of that bond; for governments this can suppress interest rates as they are tied to yields).

But – despite what lots of people thought – this on its own does not create inflation beyond the impact on government bonds. The money more-or-less stayed within the financial system and did not come through to the ‘real’ economy where we might have seen it push up prices. 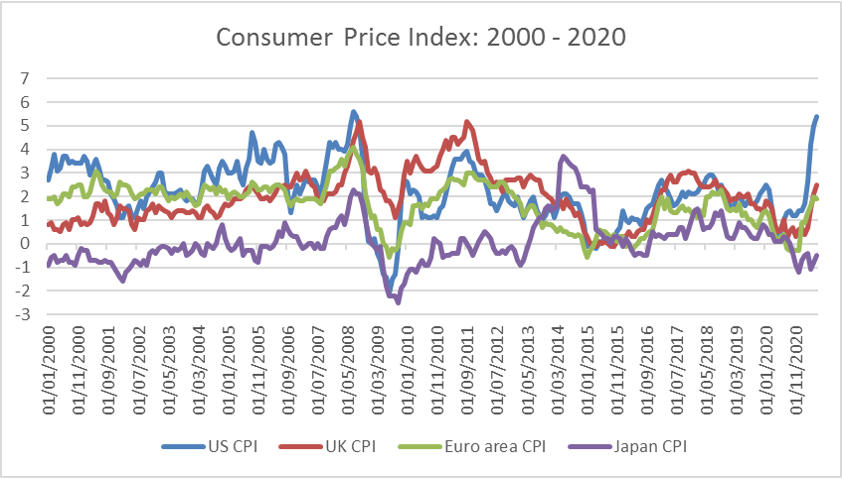 The chart above shows the low inflation regime in the US, Japan, UK, and the eurozone for the last 20 years. This alone is strong evidence of some fundamental forces keeping inflation relatively contained, despite spikes in 2008, 2011 and
currently. Put simply, inflation has stayed low despite strong business cycles and low unemployment rates.

There are some key theories for this, all of which hold water.

Demographics: The theory that there is a statistical relationship between inflation and the age structure of an economy, meaning inflation tends to rise when there are several dependents and fall when the population ages. Why? In a younger economy there is more demand for goods and services. Emerging market economies are good examples of this; unlike developed economies, inflation has still been an issue for Brazil, Turkey, and several African countries. This factor is reversed as the population ages and there is less relative demand for products within the economy (such as in Japan). In the UK we saw how those with cash reserves and investments, such as older retirees, were able to save and sit out the financial crisis. While the lack of wage inflation and demand meant those without savings and assets, typically younger people at the start of their careers, were unable to build up their financial positions.

Supporting this is the idea of ‘secular stagnation’, also known as the ‘Larry Summers (ex US Treasury secretary) theory’. This suggests that excess savings and lower demand impact inflation in a similar way to demographics. If cash savings are seen as key to the economy both on an individual level and at government level – remember austerity and “we’re all in this together” – then it’s likely interest rates will be kept low, thereby further suppressing inflation (and growth).

Globalisation and technology: We put these two factors together, though it is harder to find statistical models to show this effect, it makes sense that greater supply and choice via these themes have allowed for lower structural inflation. We see this in goods and services: remember how hard it was to compare airline flights and insurance prices – now prices comparison and quick service access is everywhere. Globally, the success of the Chinese economy provides a window on this phenomenon – particularly for goods – as high-end technology has become cheaper over the years offsetting price rises. Laptops, smart phones and televisions (all mass-produced in China) are relatively much cheaper than they were 20 years ago because markets have expanded and production costs have fallen. We can see this in services too: though for many spending was squeezed after the GFC, it was easier and cheaper to travel, or to access services through new technologies. The vast size and competitiveness of the digital marketplace has made it possible to access everything from films to financial loans instantly via an app.

What about interest rates?

The theories above are also correlated with the low interest rate regime that we’ve observed for over 20 years. “Normally” low interest rates are highly stimulative and lead to higher inflation, but that’s not happening. 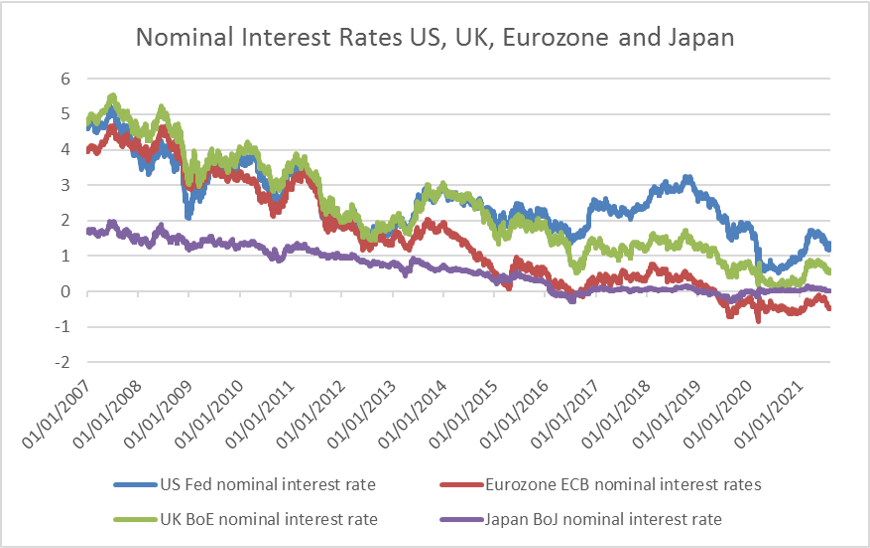 As can be observed from the graph above, the trend for low, declining, interest rates has dominated since the financial crisis of 2008/2009. More recently, in a very strong cyclical US economy, the ceiling for US interest rates reached was just above 3% in 2018 – less than half the “normal” level pre 2008/2009.

Even more remarkable is the complete disappearance of the “compensation for inflation”. The charts below show US and UK short-term ‘LIBOR’ or bank interest rates adjusted for inflation. We can see that since the GFC, in around 2008, the old days of circa 5-6% cash rates and 2-3% inflation which gave cautious savers a respectable return have long gone. Why? 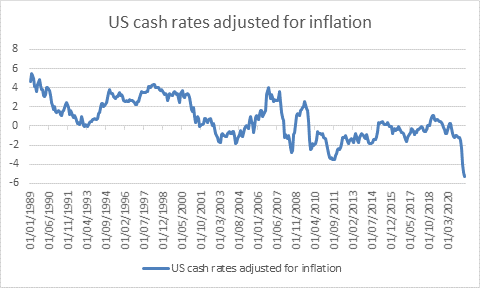 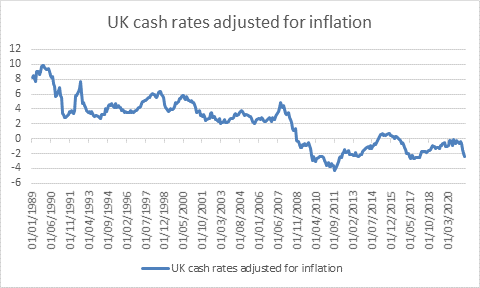 There is clearly a correlation between low inflation and low nominal and real interest rates. Is it all QE based? Have the government supressed interest rates via bond buying? Whilst QE will have impacted bond yields (studies indicate circa 0.5%), it is noticeable that the US stopped QE between 2014 and 2020 and real (and nominal) interest rates continued to stay low.

It is partly central bank related in the sense that central banks are confident about lower inflation and feel no need to impose a higher nominal and real rate on the economy. We would offer another reason: that the attractive real yields of the late 1980s up until the financial crisis were the real anomaly. As the very long-term chart sets out below, from 1945 we can observe several periods of close to zero real rates and negative real rates when we experienced an inflation surprise. This ‘phenomenon’ is nothing new. 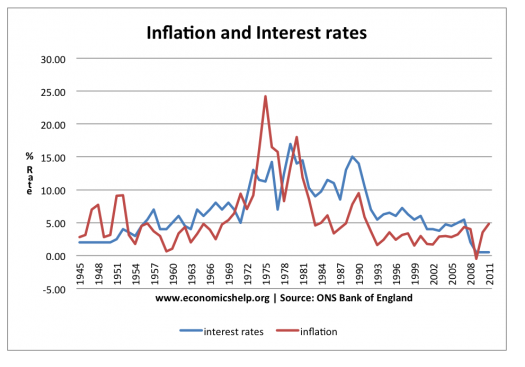 Our premise is that an investor should not expect a real return for simply leaving money in cash or in short-term government debt such as Treasury Bills – i.e. taking no risk – even though the pre-GFC era led us to believe that this was the “norm”. We contend that an investor should get zero real return for taking no risk. Once a client extends credit risk via deposits at non ‘National Champion’ banks, some credit compensation is due. However, a government guaranteed three-month Treasury bill should return an investor a maximum of zero after inflation.

Looking ahead, structurally low interest rates are here to stay even though inflation is rising. Why? The onus remains on central banks who are extremely unlikely to raise interest rates, especially as they have identified the current period of post-pandemic inflation as “transitory” (i.e. lasting around six months). More important for investors is to understand that cash ‘keeping its value’ cuts both ways: not dropping, not rising. They should factor in a maximum of zero for cash after inflation – we will get there if we are lucky.

KAKOU TECHNOLOGIES: THE B CORP ENGINEERING CHANGE THROUGH COMMUNITY

Fast, flexible and fee-free: How Investment Backed Lending could help when opportunity knocks