The upcoming US election will be the biggest political event for global investors in 2020. The result could signal the direction of world trade for the next four years, as well as the economic direction of the world’s biggest – and still most influential – economy.

The major political event of 2020 will undoubtedly be the US election. And it isn’t only about electing a new president. Thirty-five seats in the Senate are up for grabs, as well as all 435 seats in the House of Representatives.

This election will be a ‘media thunderdome’ with lots of posturing and off-topic comments. President Trump has proved himself to be a master of tweets and soundbites that seize the news agenda and rattle around the world, causing short-term market shocks. This could mean a turbulent ride for investors, but with the contenders occupying increasingly divergent positions it will be vital to focus on the outcome rather than the feints and jabs along the way.

Since he was first elected in 2016, the President’s actions and pronouncements have shifted markets. In particular, his approach to global trade agreements has been a source of alternating stress and relief for investors as his rhetoric – typically delivered by tweet – has swung from the bellicose to the emollient. 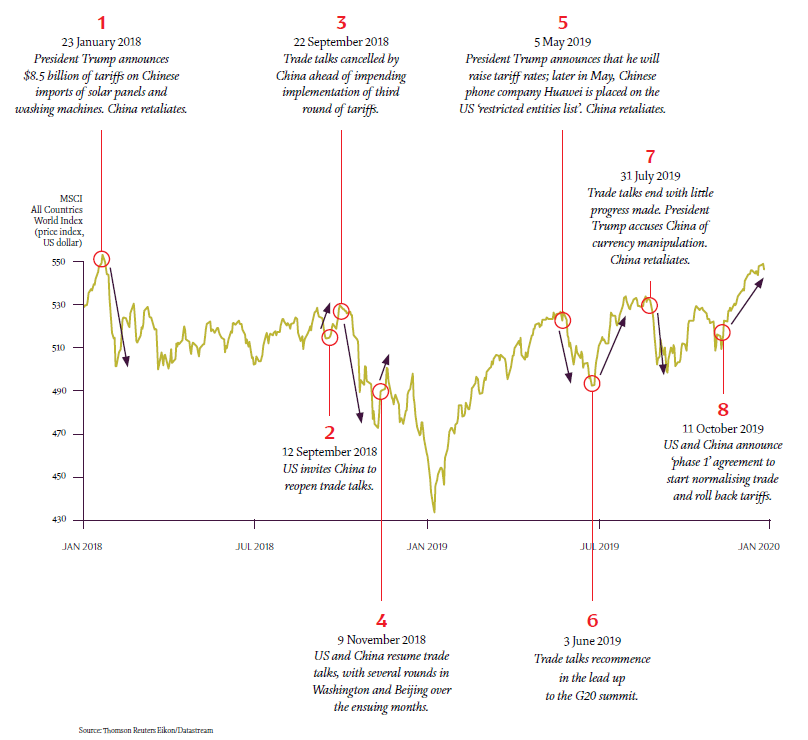 President Trump faces a number of significant challenges to his continued occupation of the White House. The White House will be concerned by low approval ratings, currently at 45% according to Gallup polling in December 2019. This compares to an average approval rating of 52% for US presidents at this point in time of their third year. Historically it has been very difficult for a president to be re-elected with an approval rating below 50%.

President Trumps approval rating as at December 2019, one year out from his reflection campaign, compared to an average 52% for previous presidents at the same point in their term.

A change in administration would likely introduce some short-term volatility, but the longer-term impact of individual candidates is harder to judge. We will be carefully tracking the primaries from February onwards when the Democratic nominee will become clearer as we consider what market impact, if any, the challenger may have.

At an institutional level, a Democratic president who facing a Republican senateSenate might be less disruptive for markets than one with party backing. Gridlock would prevent any potential rollback of Trump’s tax cuts or contentious policies around healthcare, technology and energybig policy shifts that could create market volatility. But stagnation and malaise would likely benefit no one and, while Democratic control of the Presidency and both houses could be negative for some sectors, it could also lead to opportunities opening up elsewhere as the policy focus shifts.

Political events can bring opportunities. As we saw in the aftermath of the EU referendum and the election of Donald Trump in 2016, market volatility in response to surprise results can create short-term dislocations that investors can exploit if they are prepared.

In line with our usual investment policy it will be important to anchor any investment views on data and sound analysis. Combining an understanding of investment data with a shrewd assessment of the political environment will help us make informed decisions about economic drivers such as interest rates, inflation, growth or corporate profitability that will ultimately determine future investment outcomes.

Explore more of the Q1 Outlook

7 min read
Our latest property focus covers top trends in the capital’s high-end housing market. And in a special feature, we look at how one of our clients is building an eco-friendly home.
Read more
7 min read
Investments
|

The golden rules to retirement planning: Where there’s a will there’s a way

4 min read
In the first of a new series of articles, we look at the best way to protect your and your family’s future. From wills to trusts to inheritance tax, there’s a lot to think about.
Read more
4 min read