Interest rates are at record lows in developed countries, essentially at zero in many and even negative in the eurozone and Japan. Central banks have had to open the taps of the money supply to support businesses through the lockdown measures, and interest rates have been slashed even in countries where they were already low – the UK base rate was at a near historic floor of 0.5% before being cut to 0.1% in March.

As well as supporting business, low rates mean governments have access to cheap debt to fund stimulus measures. Germany, for example, has added an extra €218.5 billion in government borrowing so far in 2020, but, remarkably, its interest payments will fall to €9 billion this year from €40 billion the year before on substantially less debt.

However, the other side of low interest rates is a very low return for holders of cash and, as a consequence, miserable income yields on major government debt.

Inflation is winning the race with interest rates

Asset managers hold cash and government bonds to reduce risk in portfolios. Cash will always keep at least its nominal value and even grow a little thanks to deposit interest. Bonds, in the meantime, provide a reliable income in the form of regular interest payments and a payout on maturity that’s virtually guaranteed on government bonds. Riskier assets like equities can fall in value and dividend income can also fluctuate.

But ultra-low interest rates mean that cash and bonds are exposed to a different form of risk – inflation. Inflation risk is the chance that high inflation will result in the real value of an asset falling. While £10 remains £10 whatever may happen, rising prices mean that it buys progressively less over time.

If the deposit rate or bond yield is higher than inflation, that doesn’t matter. In that scenario, the nominal amount of cash will rise more quickly than its spending power falls, and bond payments will provide an income that compensates for any fall in value of the principal of the bond. 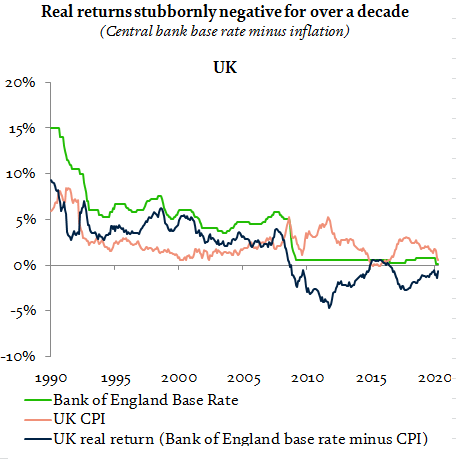 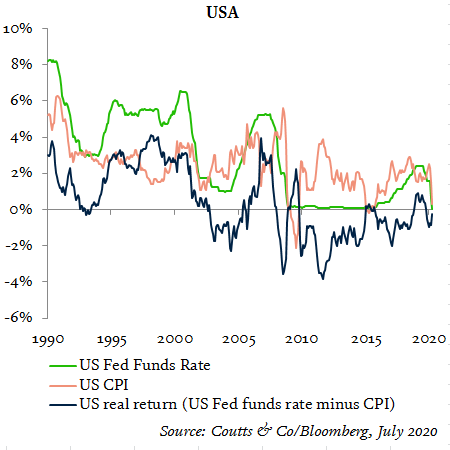 But what about the future? Will we see positive real returns from cash or government bonds soon?

The short answer from Coutts is, no.

We’ve believed for some time that inflation and interest rates are set to remain low for the long term, and the impact of the COVID pandemic is likely to intensify these trends.

Inflation seems to have become stuck at historically low levels in many developed economies. Japan, for example, has averaged an inflation rate of zero for 20 years – prices have effectively not changed for two decades regardless of central bank action. In the eurozone, inflation has been drifting lower, on average, despite eight years of negative interest rates.

Even in the inflation-prone UK, with substantial currency devaluation and low base interest rates, inflation has failed to take off, languishing at around 2% for most of the last decade. Even when inflation as measured by the CPI spiked at 5.0% in 2011 and more recently was at 3.0% in late 2017, it quickly fell back without any intervention from the Bank of England.

Low inflation is why interest rates have been so low for so long. Central banks are operating on the previously reliable formula that low rates lead to higher inflation.

But that’s not happening. And without evidence of rising inflation, there’s no reason for central banks to raise interest rates. On the contrary, there’s a real concern that tighter monetary policy could lead to a deflationary trend.

The only scenarios that could lead to higher rates are:

Neither of these looks likely, in my opinion.

With low interest rates with us for a generation at least, low-yielding government bonds and cash are unlikely to keep pace with even low levels of inflation. While really extreme market environments – such as those in the first quarter of the year – make them temporarily attractive, the long-term picture is poor returns for years, maybe decades, to come.

As income streams from bonds and cash fall, investors will be on the lookout for assets that provide a superior yield.

One potential beneficiary is property. While the outlook for commercial property is more mixed, rental yields on residential property look attractive compared to the income offered by cash or bonds.

We wrote about how this situation could affect the UK residential property in our article Coronavirus the broader impact – Property. Early evidence shows that the UK property market has been relatively resilient coming out of COVID, providing some validation to our view.

The low interest rate regime is also a positive for equity returns. Why? It’s all about dividends.

Equities offer investors a long-term income stream through dividends. This is an important part of the return from equities – that’s why it’s important to consider what’s called the ‘total return’ of a particular share rather than focusing on price movements alone. And over the long term, share prices tend to move in line with company earnings, reflecting the importance of income to investors. 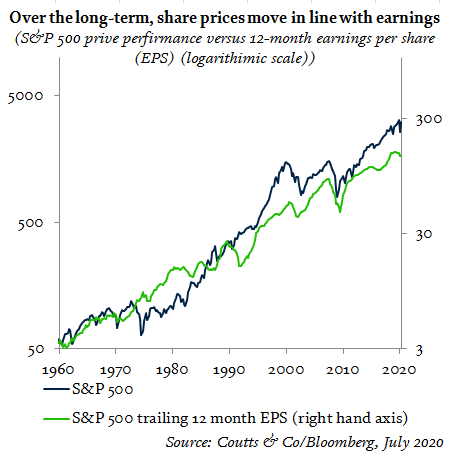 The current crisis is having a severely negative affect on dividends. Many businesses have faced a significant reduction in their income. But we think that share prices could rise during the coronavirus pandemic, even if corporate earnings fall.

Evidence suggests that real, long-term interest rates have fallen a lot more since the start of the pandemic than earnings estimates. If bond yields fall by more than enough to offset the decline in corporate earnings, then shares could become relatively more valuable as they offer a better yield than the negative return on bonds and cash. 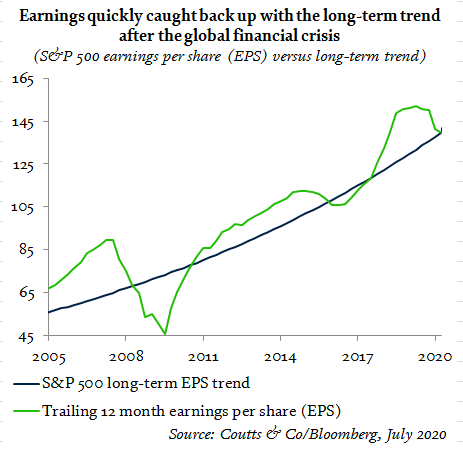 In short, if you’re looking for a positive low-risk return, putting the money into the stock markets and tapping into corporate earnings could be the best option for the foreseeable future.

3 min read
Peter Flavel, Chief Executive Officer, Wealth Businesses, explains why Black History Month is so important to us and why we see it as just one step in a constant process to champion recognition and inclusion
3 min read
Investments
|

Investors, let’s take a step back from NFT mania

4 min read
Non-Fungible Tokens are the latest hot trend but are they worth the time it takes to understand them?
4 min read
Investments
|

A time for moderation