New economy: The End of the Middle Man

Disruption is spreading. With technology connecting consumers directly to service providers across more and more sectors, we identify the hot spots for future change.

We live in an era where new technological, environmental and monetary frontiers are being constantly extended. Shifting demographics and rapid technological change are creating a new world and governments, businesses and people are struggling to stay ahead.

The technological disruption is universal and trends in data transportability, cloud platforms or the generational shift away from ownership towards experiences have created significant changes in recent years.

Technology is having a dramatic impact on the economy and markets and, as ever, Wall Street reflects these themes. The share of technology companies, especially in US equity indices, has increased significantly over the last years. The weight of the Information Technology sector within the S&P 500 index increased from 19.4% at the end of 2014 to 26% in June 20182. [2] 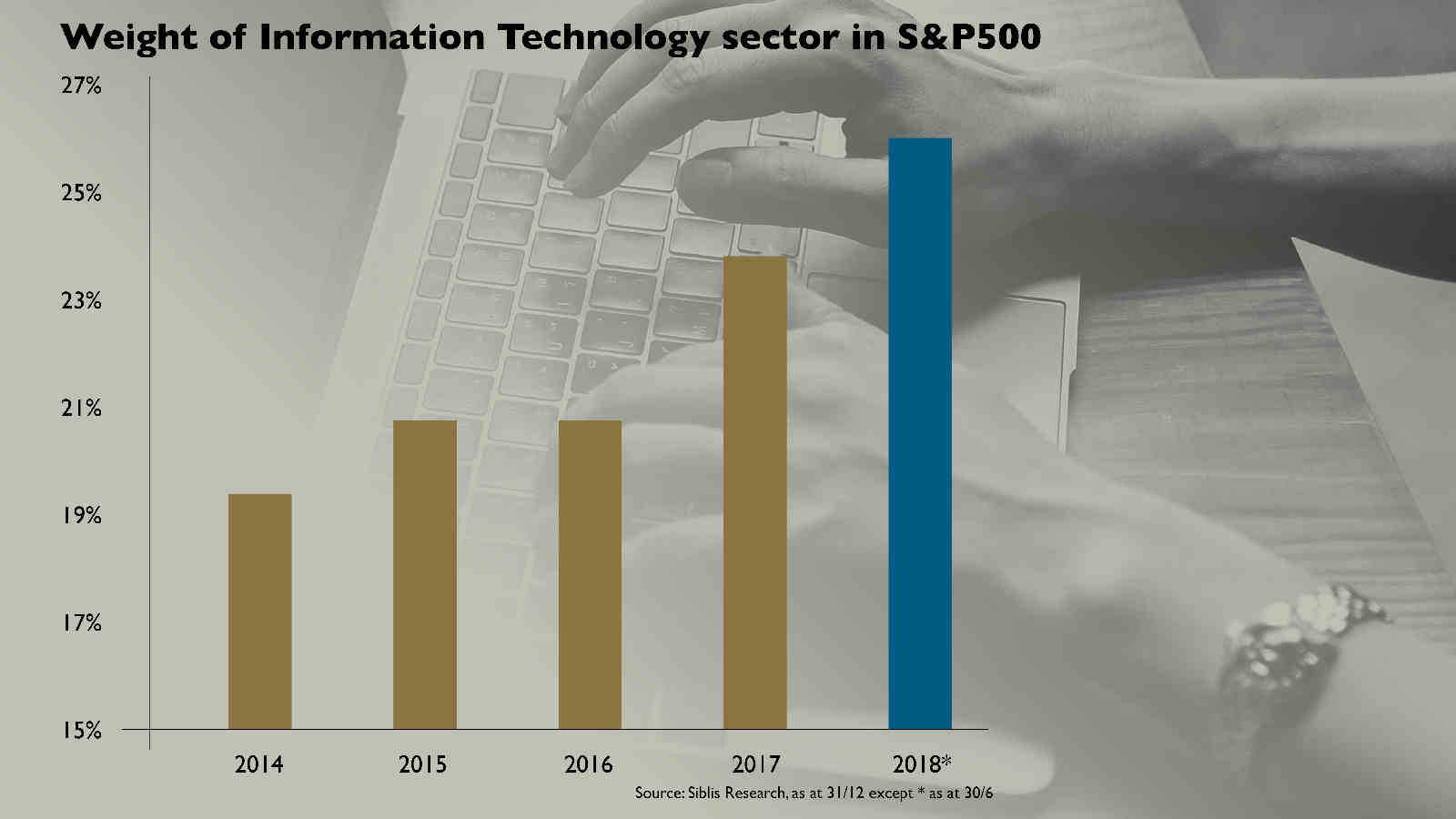 Putting aside the excitement that new ideas can generate, the actual impact of technological innovation on economic growth, inflation and productivity remains difficult to measure. Do technological advances inevitably lead to economic growth? That argument has been going on for many years.

One point of view is that today’s technology is more ‘disruptive’ than ‘creative’ and hardly delivers any improvements in terms of growth or productivity.

Venture capitalist and co-founder of PayPal Peter Thiel complained about the relative lack of progress in transportation and medicine since the early 1970s. He suggests that technology is proving far less transformative than hyped partly because well-established incumbents try to defend their market share. He infamously argued: “We wanted flying cars, instead we got 140 characters.”

And, of course, there is the issue of rising unemployment. As machines perform more and more tasks in both manufacturing and service sectors such as banking, logistics or health care, more people will lose their jobs, leading to lower consumer spending and slower economic growth.

This position emphasises the delay between innovation and its final impact on economic growth and productivity. Economist Chad Syverson argues[1]. that the patterns in productivity growth from information technology are similar to those observed since the introduction of electricity. Erik Brynjolfsson and Andrew McAfee think that the global economy is set for a dramatic growth surge driven by smart machines and their exponentially growing capacity to handle data or enable artificial intelligence.[2]

[1] Chad Syverson “Will History Repeat Itself”, University of Chicago 2013

One of the most radical and visible changes in recent years has probably been the emergence of the sharing economy. Through smartphones and big data, direct consumer-to-consumer rental and lending have become easy and cost-efficient. Increasingly, people choose to rely on online avenues for things like arranging short-term property lets, making online payments or raising money – for charity or to fund a business idea.

Peer-to-peer lending eliminates some of the complexity and high cost of traditional lending by eliminating administrative and infrastructure costs. Borrowers are often able to secure funding at a lower rate than through traditional sources. Innovators in this sector include:

More attractive online selections and faster delivery times mean that ecommerce is now growing at the expense of the high street.

In 2017, the UK saw 5,855 shops close, more than in any year since 2010, largely because of the rise in ecommerce. The trend has continued in 2018 with well-known brands such as Marks & Spencer and Debenhams closing branches and brands like Toys R Us closing down entirely.

In 2017, in a much-noted development, Amazon acquired the more than 400 shops and 15 distribution centres of Whole Foods. Amazon has stated that it will use Whole Foods locations to offer online ordering and in-store pickup, and will experiment with using locations as mini-centres for local grocery delivery.

While social networking sites have captured strong advertiser interest, they have had minimal success as shopping platforms. But Facebook, Instagram, Snapchat and Pinterest, are increasingly looking for ways to monetise users and their engagement through shopping features.

The end of intermediaries

The rise of the sharing economy shows how technology is changing the paradigm in key sectors. Already, traditional retailing has been turned upside down and financial services look set to follow shortly. Increasingly companies that have a traditional intermediary role are challenged in their business models as technology opens up new channels for producers to reach out directly to their market.

And investment itself may yet come under pressure from these same forces. We’re only scratching at the surface of the potential applications for blockchain technology, for example. This could include the eventual elimination of conventional stock markets in favour of blockchain-driven market places.

While we’re unlikely to see stock markets disappear overnight, in the longer term we can’t ignore the possibility that the traditional distribution networks for capital – stock markets, lenders, the people that manage them – could go the way of DVDs and CD players.

For centuries, Coutts has been the bank of change makers and today we are proud to support fast-growing businesses in the UK that are innovating for the future.

Over the past few years we’ve raised capital for a range of companies that are changing the world we live in from virtual reality gaming, hand-held rapid DNA diagnostics, drone mapping for large scale infrastructure projects, fertility diagnostics and real-time imaging technology for cancer surgeons.

The UK is a world-class breeding ground for innovation and technology start-ups. Our team makes the most of the Coutts client base, our extensive network of business connections, and our relationship with NatWest to find exciting opportunities across a broad range of sectors.

Hans Prottey, Head of Strategic Solutions at Coutts, said: “The service is designed to introduce proprietary private company investment opportunities to an impressive group of experienced clients that can offer both capital and experience to early-stage businesses.”

Speak to your private banker if you would like to know more.

The relationship between commerce and technology is creating new avenues for exchange. Producers and service providers are increasingly circumnavigating the ‘middle man’ and reaching directly to consumers.

In the meantime, social media is extending its reach beyond ‘influencing’ with platforms such as Facebook launching shopping portals.

And it’s not just retail. Platforms like Kickstarter, LendingClub and Prosper are bringing together investors and borrowers in new ways that could revolutionise finance.