Coronavirus: The broader impact – a break-up for Europe?

In the third of our articles exploring the long-term impact of the coronavirus outbreak, Coutts UK Chief Investment Officer Alan Higgins explores the chances of the EU breaking up and what that could mean for the global economy.

It’s possible that we’re about to see the end of the European Union. The coronavirus outbreak, and reaction to it, has highlighted regional differences that throw strong, existing tensions into sharp relief.

With the impact being felt unequally, political pressures within the region are rising. And as the pressure increases, this could be the tipping point that spells the end of the euro and the union.

Italy – a focus of discontent against the EU

Nowhere is the varying impact of the coronavirus starker than in Italy. It’s had one of the highest rates of infection in the EU, and the most deaths. There are demographic reasons why this might be the case – an older population and generations living together in family homes could have led to a faster spread among vulnerable groups.

But whatever the reason, Italy is under one of the strictest lockdowns in Europe to protect its citizens. And as well as the misery of isolation, the economic consequences could be disastrous for its relatively fragile economy.

Italy’s debt to GDP ratio was already high at 136% when it went into the crisis. The need to raise borrowing to support the economy through lockdown could lead to unsustainable debt levels, and the risk of sovereign default.

Italy would have to go cap in hand to its fellow member states, but support from the European Stability Mechanism (ESM) will come with harsh austerity measures. Having their lifestyle put under pressure to pay for the consequences of the virus is likely to make Italians look to their EU neighbours and consider whether the fallout has been distributed evenly.

Similarities with the Greek debt crisis

There are some comparisons to be made with the Greek debt crisis in 2015. Greece faced a similarly difficult position of individuals having to take on an onerous burden – both personal and financial – for the good of the wider EU, rather than to benefit themselves. Combined with a government – led by the SYRIZA party – that wanted to leave the EU, there was widespread speculation that Greece would drop out and other nations would follow.

But, surprisingly, the euro remained popular in Greece. Polling at the time by the Pew Research Centre showed that 69% of Greeks were favourable to the euro and wanted to keep it. Voters recognised that, as a small country, being part of the euro was a good deal for them. The SYRIZA government understood that it simply didn’t have a public mandate to take Greece out, and so it didn’t.

In contrast, Italian politicians do have a mandate to leave the EU and the euro. According to polls conducted by news agency Dire on 12-13 March, 88% of Italians feel that Europe is failing to support Italy in the crisis. Only 4% believe that it is doing enough. And 67% of Italians regard EU membership as a disadvantage, up from 47% in November 2018. 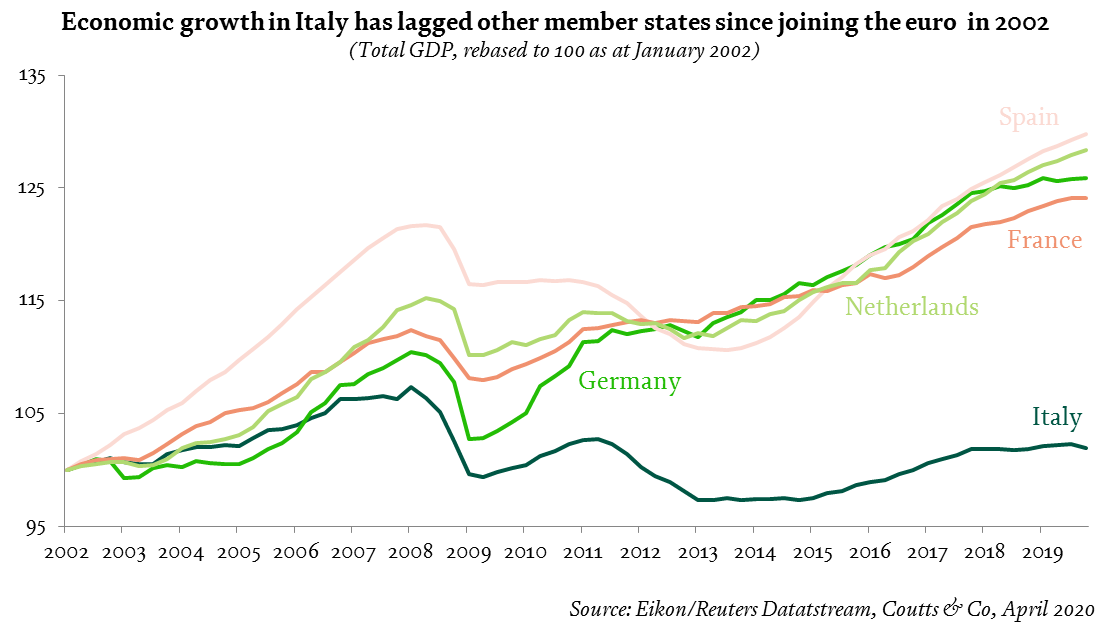 All this adds up to a very real possibility that Italy will leave the EU, and with Italy gone the union will inevitably crumble.

Italy is the third largest economy in the EU. Without its contribution, the economic pressure would be too intense to bear for countries like Spain, France, Portugal and Ireland. With debt loads increasing markedly during the lockdown period, they’d be likely to head for an exit in short order.

And from that point, the end becomes a certainty.

Imagine a world without Europe

If Europe breaks up, subsequent disruption and uncertainty would inevitably lead to a large and damaging recession. The former EU nations would obviously feel the brunt of it, and it would be exacerbated as new currencies were created to replace the euro.

But the UK, Switzerland and even the US and China wouldn’t be spared from the fallout. All over the world, importers and exporters would have to make enormous adjustments that would sap resources, and a substantial global recession becomes likely.

The UK and Switzerland would emerge as safe havens, and could expect substantial long-term investment and short-term capital inflows. This would be business as usual for Switzerland, which has been a consistent beneficiary of flows in times of stress.

It would be a more unusual situation for the UK. But by then Brexit will be long forgotten and the UK will begin to look like an increasingly attractive and low-cost place to operate an overseas business, branch or factory.

The export-dependent German economy would suffer as the new deutschmark appreciated by 30% to 40% against other new European currencies, making its products look expensive. It would take many years for German industry to adapt to the new regime and higher quality production from China would be a major threat.

On the other hand, we would expect Italy to regain competitiveness, benefitting from a substantial devaluation of the new lira. The many already successful, family-owned Italian businesses would experience a boom as Italian goods became increasingly competitive around the world, thanks to a favourable exchange rate.

Can it be prevented?

The issue has not gone unnoticed within Europe. French President Emmanuel Macron has said “The union and the single currency will be threatened if the richer members – Germany and the Netherlands – do not show more solidarity with the pandemic-stricken nations of southern Europe.”

The answer certainly doesn’t lie with the ESM, which is hated in Italy because of the austerity conditions that come as a condition of help.

So, what’s our view?

Our central scenario is that the northern block in Europe – Germany and the Netherlands – will relent and eventually provide financial support for the EU, without the harsh conditions that come with the ESM. This is likely to defuse the political stress in Italy – and rumblings of discontent elsewhere – and put the EU back on track.

Italy’s prime minister Giuseppe Conte has raised the possibility of the EU issuing ‘coronabonds’ – some kind of joint liability facility to support afflicted nations. It is possible that we’ll see a solution like this in the months ahead.

If so, the crisis could be averted and Europe will stabilize once more. If not, however, we could see a moment of truth for the EU and the euro. Either these countries are in this together or it could all come to a swift end.

2 min read
If you’d like to use your extra time at home during the coronavirus lockdown to support people and causes impacted by the pandemic, our philanthropy team has some useful suggestions.
Read more
2 min read