Brexit – the UK’s future outside Europe

The British lion appears to have been held on a leash over 2020. As well as the great global unknown that is the COVID-19 pandemic, the UK has had another question mark hanging over it: Brexit.

Since Britain voted to leave the European Union in 2016, businesses – and therefore investors – have grappled with what the new relationship will mean. Accordingly, the UK economy has underperformed most other major economies during the COVID-related downturn. UK equities, meanwhile, have underperformed the major indices, and the fortunes of the pound have been hostage to the shifting tides of Brexit news flow. 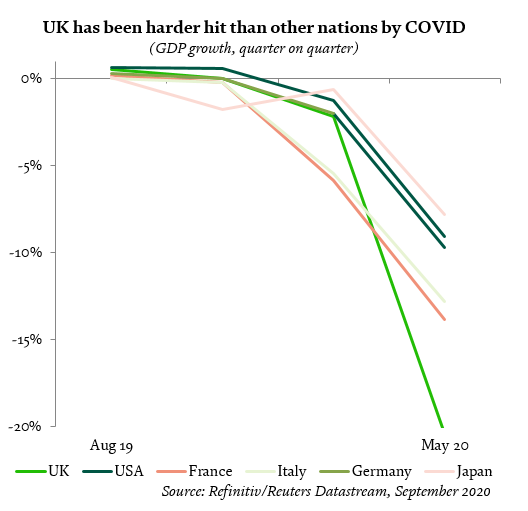 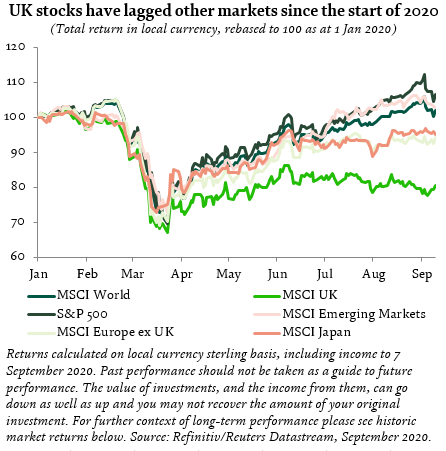 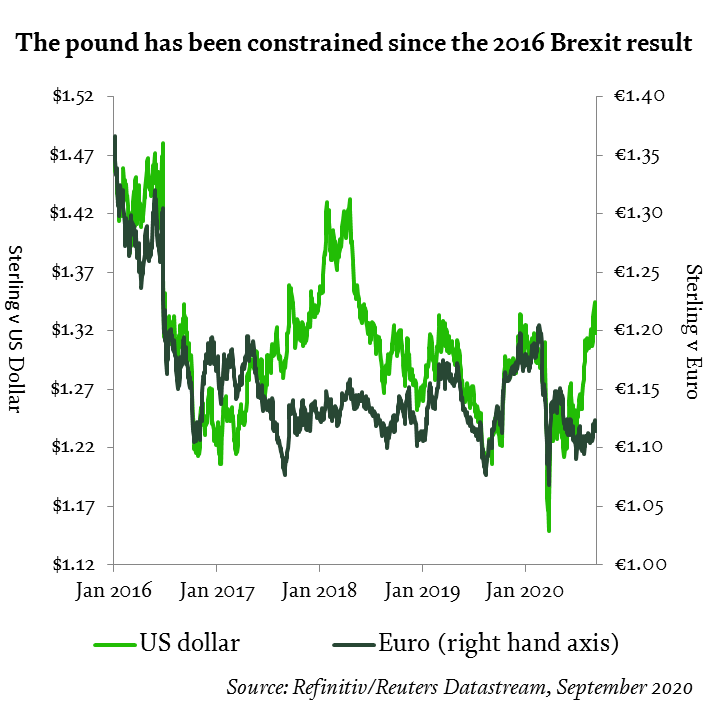 Back in 2016, our view on Brexit was “Not much to be gained from Brexit for either the UK or the eurozone”. Broadly, that’s still our view.

However, we also indicated that the UK has some structural economic strengths that will endure after Brexit is done. And again, our view hasn’t changed.

A good place to work

Where has the UK historically out-performed in terms of economic performance? Employment.

Recent unemployment rates – in particular, prior to the COVID emergency – have been at a 40-year low, comparing favourably in an international context alongside the USA and New Zealand (all to be revealed later about our Kiwi friends). 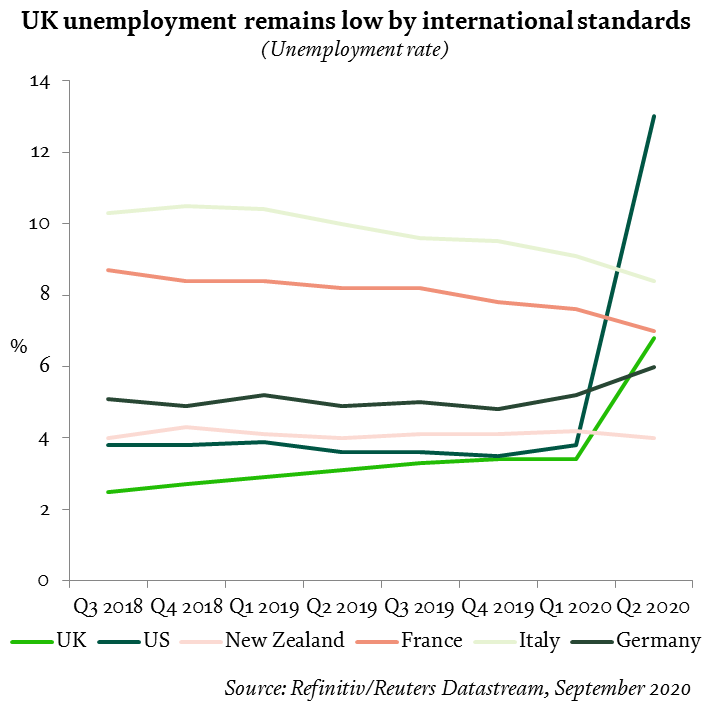 Why has the UK performed so strongly with respect to employment? Critics will point to the majority of these new jobs being low cost labour, although the UK has the protection of a minimum wage.

While there’s some truth in this, a stronger influence lies with supply-side incentives.

The OECD Taxing wages 2020 report provides an excellent comparison between the 36 OECD countries on the extent, and split, of tax paid by employers and employees. It calculates a ‘tax wedge’ that takes into account the tax status of both employee and employer, with the lower the tax wedge the better. 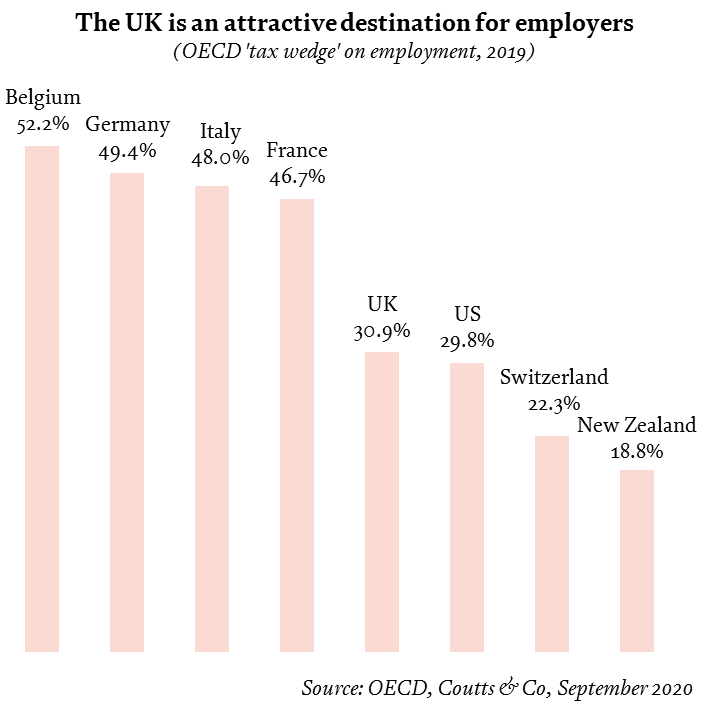 As this table shows, the UK compares very favourably with many major OECD economies, and the OECD average of 36%. Seeing the UK sitting alongside the US and Switzerland, one criticism could be that this is a race to the bottom in terms of a less-regulated, lower taxation economy.

However, an important counterpoint to this is the low figure of 18.8% for New Zealand, a country hardly considered a hot bed of laissez-faire economics. The Kiwis’ status is not based on weak worker rights and low tax, but simply good, common-sense economic policy – namely, incentivising employment.

To see the difference that the tax wedge makes, we set out below the unemployment rates of selected countries (pre-COVID, to adjust for the current emergency). As can be seen, low employment tax countries like New Zealand, the UK and Switzerland fare much better than corresponding higher tax-rate countries. 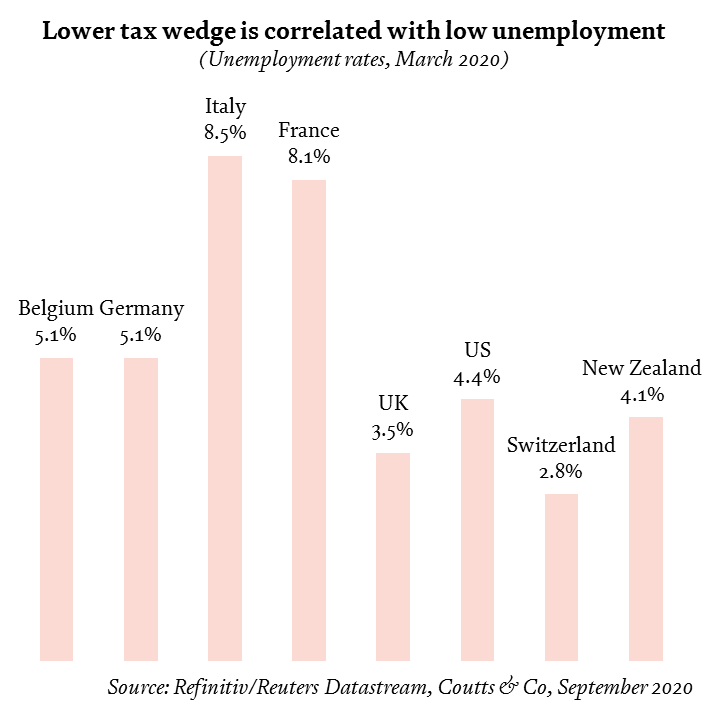 Mergers and acquisitions (M&A) collapsed globally in 2020, reflecting the impact of COVID-19. However, despite the widespread pessimism about the UK economy, there is no shortage of M&A interest in UK companies.

We have seen takeover interest in large, quoted companies such as Sky and the LSE, alongside numerous transactions in the well-established successful mid-cap UK sector. Prior to the COVID-19 crisis, the EY Global Capital Confidence Barometer had the UK as the number one spot in terms of investment destinations for the first time in the survey’s 10-year history.

Why? Because with sterling under pressure, UK companies look like good value. Executives can see through Brexit to a UK economy that will ‘revert to norm’, as it were, and continue to be a strong and stable place to do business when the questions around the UK’s relationship with the EU are resolved.

UK remains an easy place to do business

As a leading banker and adviser to business owners and entrepreneurs in the UK, we talk to many clients about their experience doing business in the UK and overseas. Our clients, resoundingly, tell us that the UK is one of the most straightforward countries to operate in.

Encouragingly, this anecdotal evidence is backed up by independent research via the World Bank’s comprehensive study, Doing Business. This is an annual survey of the ease of doing business based on detailed analysis of 190 countries. Relevant contributions to an overall score include:

The UK ranks eighth out of all countries surveyed, with consistently favourable scores across multiple categories. In contrast, France and Italy, despite being home to many world-class businesses, rank at 32 and 58 respectively.

Is this another measure of a race to the bottom in terms of unregulated capitalism? Encouragingly the UK and other higher-ranking countries also score well in tackling corruption. Transparency International ranks the UK as 12th out of 180 countries in terms of their Corruption Perception Index.

Finally, which country ranks at the very top of the world, in terms of both ease of doing business and the Corruption Perception Index ? Again, New Zealand. This shows that these policies have widespread and broad political appeal across the traditional left and right spectrum.

Despite the expected, short-term difficulties based on either a no deal or even a “last minute” deal on Brexit, the longer-term position of the UK looks assured. The UK has favourable incentives for both employers and employees and is one the easiest places in the world for doing business.

However, just like the British Lions on the rugby field, don’t expect the UK to surpass the number one slot of New Zealand any time soon.

When investing, past performance should not be taken as a guide to future performance. The value of investments, and the income from them, can go down as well as up, and you may not recover the amount of your original investment. The information in this article is not intended as an offer of solicitation to buy or sell securities or any other investment or banking products, nor does it constitute a personal recommendation.

6 min read
What the buying activity of Coutts clients tells us about the future of the market for prime property across the UK. Plus our usual round up of the latest local London trends. Welcome to our latest Coutts London Prime Property Index.
Read more
6 min read
Investments
|

A positive end to a remarkable year

3 min read
We reflect on markets in December and how we navigated the ups and downs of 2020.
Read more
3 min read
Investments
|

2 min read
Supporting causes you care about could really brighten up your 2021.
Read more
2 min read