Long a bellwether for emerging markets, what happens in China is now crucial to the wider world.

Traditionally, growth in developed markets has been the major contributor to emerging market growth. Emerging market countries have typically been exporters – of raw materials and manufactured goods from countries like China and South Korea, or IT services from India.

But this is changing.

Emerging markets take their place on the world stage

Key emerging market economies are evolving from being export-driven to relying more on domestic demand. For example, exports account for just $260 billion of India’s $2.6 trillion (nominal) economy, or about 10% of its total economic output, while China’s $2.2 trillion in exports account for 20% of its $12.2 trillion (nominal) economy. Domestic factors such as consumption now have a big influence on these economies.

As these nations grow their domestic economies, their share of global GDP is increasing. By 2060, the share of China and India will have risen to 45% compared to 33% today. These so-called emerging markets are now taking their place with the traditional developed economies. 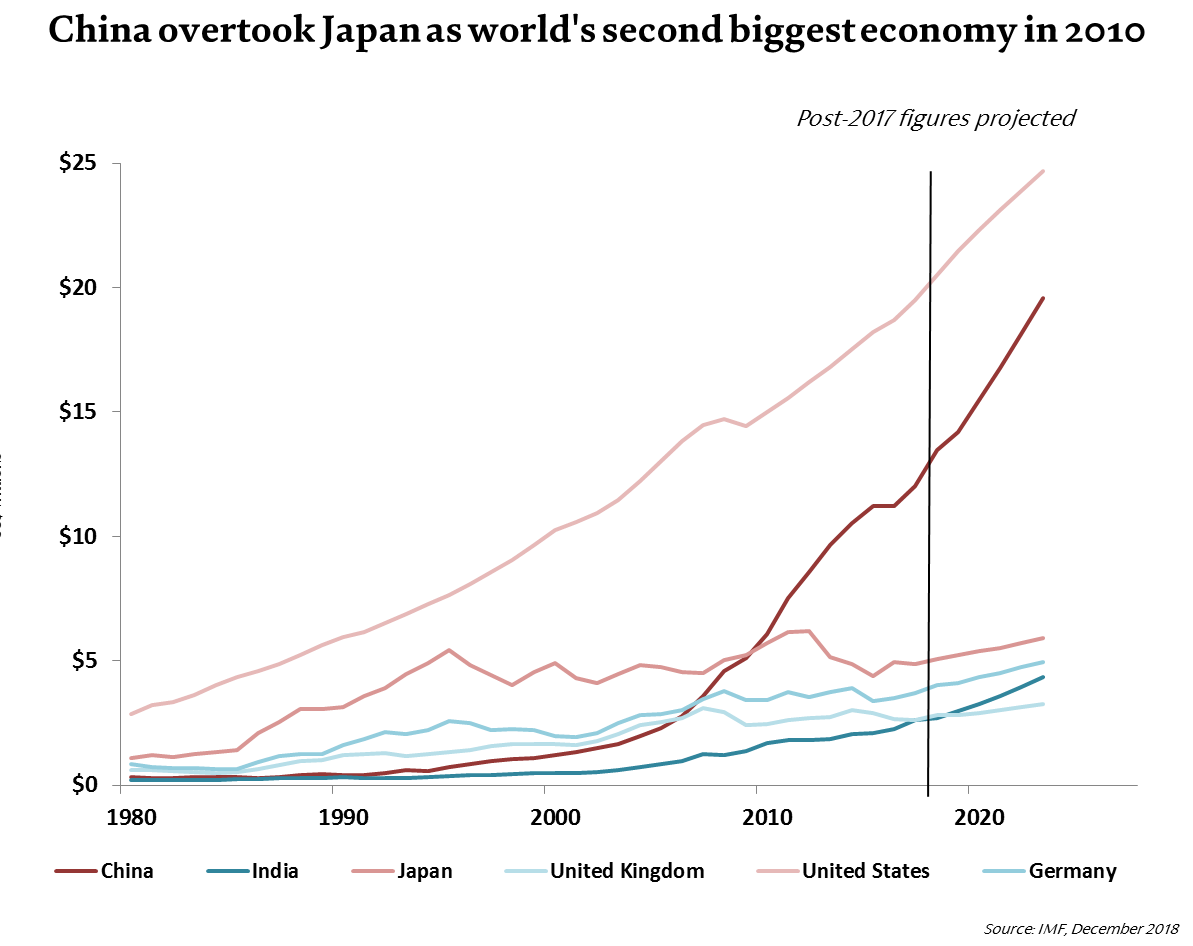 Rise of an economic super power

Increasingly, the fortunes of the largest of the traditional emerging economies are influencing the economic growth and prosperity of developed markets, and nowhere is this more the case than for China. In the last 30 years, China has gone from a GDP on a par with Canada or Brazil, to the world’s second largest economy by a substantial margin. Market reforms beginning in the late 1970s revitalised the economy by opening Chinese markets up to foreign investors, allowing entrepreneurs to start businesses, and privatising many state-owned enterprises.

The cumulative effect of these reforms was to trigger strong economic growth. GDP of over US$12.2 trillion compares with the US – the world’s largest economy – on US$19.5 trillion, and Japan – now the number three economy – on $US4.9 trillion. Commodity exporters in countries like Australia, Chile and Peru, and manufacturing exporters in Germany, Japan and South Korea, all benefitted from China’s need for resources during this phase of dynamic growth. 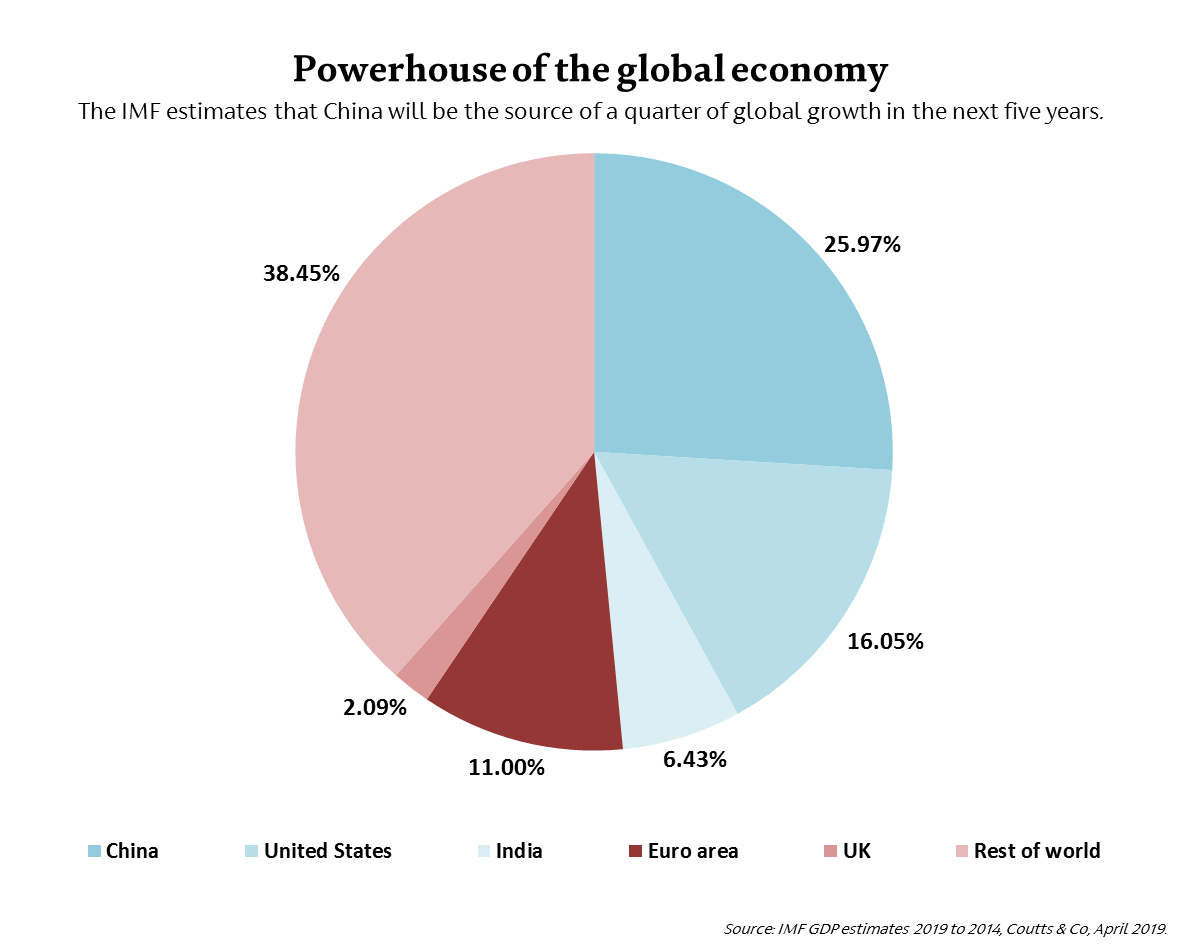 But growth is moderating now, and slower growth could be bad news for these economies. The long-term impact of slower growth in China is one factor making us cautious on the opportunities in Europe. China was Germany’s biggest export destination in 2017, for example, but German manufacturing has stagnated this year as Chinese demand has shrunk.

China’s economic slowdown has implications for exporters and commodity producers. China has been a voracious consumer of commodities to fuel economic growth since 2000, and its transition to an internally focused, service-based economy is already having a significant impact on global commodity markets.

As China moves towards the profile of a developed country, demand for industry is likely to stagnate. On the other hand, the shift to cleaner energy and renewables will be a benefit for the relevant producers, including China itself as renewable energy is generated domestically.

Opportunities in the new Chinese economy

As Chinese policy makers attempt to change the country’s economic profile, economic sectors specified in plans such as ‘Made in China 2025’ stand to benefit. These include:

The economic slowdown and the big risk

Over the last year we have seen the Chinese economy and markets weaken. There are clear signs of a slowdown in exports and domestic demand. Economic growth is being constrained by lower spending as the government attempts to reduce domestic borrowing, slowing global growth, and worries about the trade war and other economic disputes with the US.

In response, the Chinese government has boosted fiscal stimulus and loosened monetary policy. The steps have been less dramatic than during previous downturns, however, mainly to avoid any resurgence in financial risk-taking or leveraging in already over-indebted sectors. This may be sufficient to stabilise the domestic economy going forward, but may not be enough to meaningfully lift the rest of the world, as it has during past cycles.

As China has become much more reliant on domestic demand and less reliant on global trade over the last decade, trade tariffs are likely to be less harmful. But risks remain around conflict between the US and China over technology and patents. For investors this means that supply chains will still change in the coming years (from China to other EMs) and that Chinese money-flows into the US may decline structurally.

China has gone from a relatively undeveloped economy to the second largest in the world. Having long been an exporter of manufactured goods, the Chinese government is turning its attention to developing its growing domestic market. Whereas global consumer demand was previously vital for China, Chinese consumers are now driving returns for key exporter nations in the developed world.

Thinking globally has paid off