After Bitcoin's value fell by more than a third in just a few days late in December, it seems there is a growing split between believers and sceptics.

Bitcoin fever is being called both an epochal step change that will positively transform the world of finance for ever and a speculative bubble that will inevitably end in tears. The volatility in Bitcoin’s value is representative of the conflict between these points of view.

At the heart of the debate is the idea that the cryptocurrency derives its value from its use as a payment system – a new and improved Visa or PayPal – and as a new form of fiat currency. How well it provides advantages over these may well be the defining factor in whether Bitcoin is a good investment.

A better way to pay?

As a payment system, Bitcoin is a way of getting money from one person to another, rather than a currency itself. So, when you buy or sell Bitcoins to make a transaction, you are in fact trading the tokens attached to Bitcoin’s payment protocols. These tokens can then be converted back into the native currency of the buyer and seller in the transaction.

Rather than having a central clearing house – like those used by traditional payment systems – Bitcoin has a decentralised network of ‘miners’ that contribute processing power to make transactions.  Miners are rewarded for this service in Bitcoins.

This means that there is no single, overarching authority managing Bitcoin transactions. No one owns Bitcoin, and in the eyes of believers, this frees it from some of the limitations attached to other forms of payment.

For example, there is no ‘institutional risk’ that the company controlling Bitcoin might collapse. Additionally, no single institution sets the fees for Bitcoin transactions – Bitcoin exchanges can compete to set fees as they wish, which should theoretically keep transaction prices low.

However, in practice things are not quite so straightforward. Transaction fees for Bitcoin are, in fact, quite high compared to other forms or payment. The number of Bitcoin miners contributing processing power for making transactions is relatively small, and so when there are a lot of transactions happening, the laws of supply and demand kick in. When there are more transactions than processing power, miners will prioritise users who are willing to pay more.

With demand for Bitcoins taking off in the last few months, the cost of making transactions has risen to as high as $40 per transaction, according to bitinfocharts.com. A little high if you are trying to buy a sandwich for lunch. By comparison, debit card transactions typically cost around 30 basis points of the transaction – a £4 sandwich might come with a transaction cost of around a penny.

According to its backers, Bitcoin, like gold, shares characteristics with both currencies and commodities. Like a currency, it can be exchanged with other cryptocurrencies and used as form of payment. Like a commodity it requires energy to extract (‘mine’). And like gold, its quantity is limited and no government can inflate away its value by issuing more of it. Its value as money should therefore derive from its use as a store of value and as a medium of exchange.

However, in addition to the issues of transaction costs and trade confirmation times, its exponential rise has led to extraordinarily high levels of volatility. Its recent 30-day volatility (a standard measure of how risky an investment is based on the variability of returns) is above 120, compared to around about 6.5 for 30-day volatility of sterling versus the US dollar.

On some days, if you had ordered a book in the morning the value of the Bitcoin you used to pay for it could have fallen by a third by the time it gets delivered. This makes pricing items in Bitcoins a nightmare; vendors could potentially make huge losses, although some have probably made huge gains.

Either way, it adds a level of unpredictability to transactions that’s clearly putting retailers off. The number of major e-commerce retailers supporting Bitcoin is low, and in fact declining.

As far as being a commodity, Bitcoin differs from mainstream commodities in that it has no real-world use. Outside of being a medium of exchange, Bitcoin isn’t useful for anything.

This will also hold it back as a store of value, because if it goes out of favour as a payment method there is little tangible demand to give it value. Prices for gold and oil and other commodities are supported by the fact that there is a demand for them outside being a store of value – Bitcoin has no such intrinsic value.

Demand for a decentralised and ungoverned asset was always going to be attractive in a world where faith in institutions is at a record low. But as cryptocurrencies are seen by many as a way to evade taxes and fund fraudulent or criminal activity, the principal threat that we see to their widespread adoption is government intervention.

This still left Bitcoin up by a staggering 1,400% over the year, but demonstrates the dangers of volatility, especially for anyone considering investing now.

There are also indications that some countries are thinking about issuing government-backed cryptocurrencies based on blockchain technology. Countries like Israel, Russia or Sweden among others are thought to be examining the possibility of having a state sponsored cryptocurrency. If Bitcoin’s value was mainly derived from its use as a means of circumnavigating regulation, its value is unlikely to stay high for long.

If not for its money or payment system characteristics, then what has been driving the price of Bitcoin? Our analysis shows very little correlation between Bitcoin and traditional safe haven assets. This suggests that the rise and fall in price has little to do with risk or economic sentiment and is being driven purely by speculation. Buyers of Bitcoin act as if they were only concerned about selling at a higher price, something reminiscent of bubbles.

This impression is reinforced by Bitcoin’s market characteristics. It has very low liquidity compared to other currencies - the average daily trading volume for Bitcoin is about $1.5bn, compared to about $40 bn for Mexican Peso or $30bn for Korean Won. 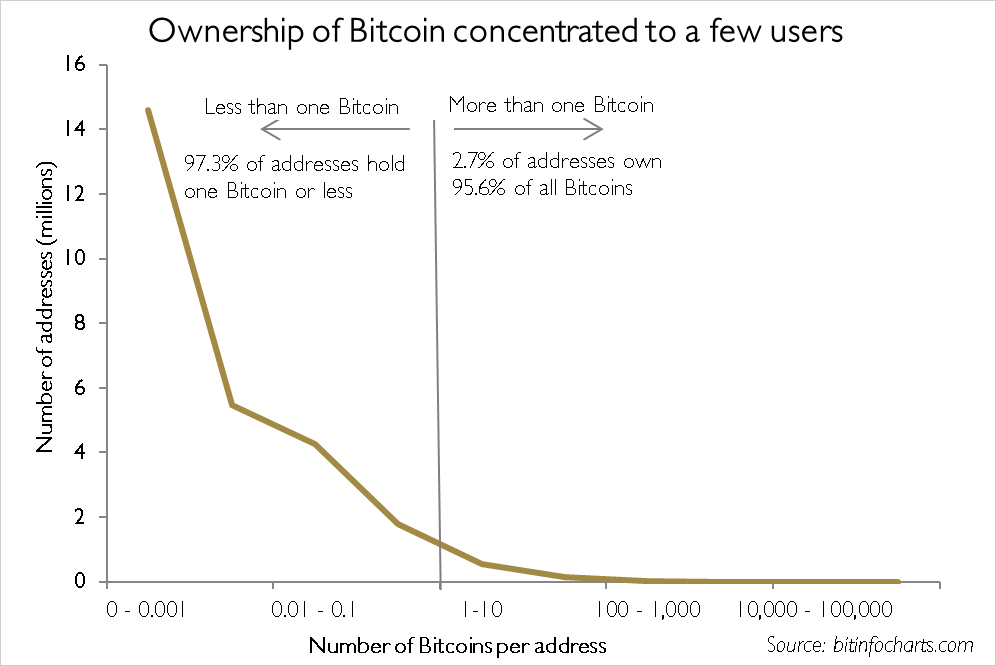 This is a very dangerous circumstance for anyone holding Bitcoins, as the price is very vulnerable to manipulation. It would only take a few comparatively small transactions by a few individuals to see the price plummet.

As it stands, the division between believers and sceptics is also a division between retail investors on the positive side, and institutional investors on the negative. While this may be an example of the establishment protecting itself against the new disruptive technology, it’s surely significant that professional investors have remained on the side lines and have been unwilling to make any significant bet on Bitcoin.

In the struggle between believers and sceptics, we remain firmly on the side of the sceptics. Bitcoin’s value does not seem justified by its role as money, payment system or commodity and we struggle to assign a fair value to it. While some form of cryptocurrency might, in the future, co-exist with traditional currencies, it is our view that Bitcoin, in its current form is unlikely to be one of them.

Bitcoin’s proponents point to its use as an alternative to payments systems like Visa and PayPal and its place as a commodity-like ‘store of value’ for investors as key positive characteristics. However, compared to traditional payment methods, Bitcoin is slow and expensive. As a commodity, it lacks the real-world use that supports the prices of commodities such as gold and oil.

4 min read
A change in administration could see a change in market direction for investors.
4 min read
Investments
|

Different thinking for a new decade