In this week’s film, Alistair Jex, Senior Portfolio Manager, Coutts, analyses the impact of Theresa May’s speeches on markets and discusses how we find value in expensive asset classes.

Our key messages this week are:

It was a busy week in the markets as they digested the UK Prime Minister’s speeches on the government plans for Brexit, and readied themselves for the first 100 days of the Donald Trump presidency.

There was a raft of important economic data too, the majority of which pointed to inflationary pressures building in the US, strong labour markets in the UK, and improving economic conditions in Europe. At its monthly meeting, the European Central Bank continued with a 0% refinancing rate in an attempt to re-inflate the European economy through monetary easing.

So it is fair to say the big numbers of last week point to an upward trend in growth and prices in the US, Europe – especially German inflation, and the UK.

No ‘soft’ option for Brexit

We have waited a long time for details on the UK’s plans to leave the EU and last week came two key speeches from the Prime Minister.

Addressing the UK’s media, Teresa May said the UK would not seek continued single market membership, and emphasised the potential for multiple trade deals. Later in the week, at Davos, she said the UK “would step up to a new leadership role” in the global economy once it leaves the EU.

Overall the tone appeared less aggressive, against expectations, and the markets reacted positively to this – especially sterling versus the US dollar.

Looking through this however there seems nothing substantially new: The UK still plans to leave the single market and customs union and sign its own trade agreements, as well as control immigration. We think this is not a soft Brexit approach.

We believe that the political event risk still remains for sterling, despite a brief rally, while the long-term valuation remains supportive.

Looking for value in an expensive asset class

The current economic climate remains favourable for risk assets, especially equities versus poor-returning government bonds. Generally, with more flows into equities, valuations have risen. So where can we find value in equity markets at the moment?

We continue to see relative value opportunities in the likes of European Equities. The Eurostoxx 50 is trading at a forward price/earnings of 13x, compared to 15.6x for the S&P 500. We also see superior earnings growth potential for European companies.

Sentiment is also on the rise in the region, based on stronger manufacturing data in Italy and rising business confidence in Germany. 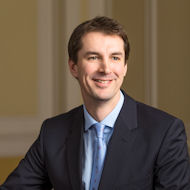 Alistair joined Coutts in 1998 and is responsible for running high net worth portfolios, including advisory solutions, and in addition leads a broad team of Portfolio Managers. He is a Chartered Financial Analyst and a Fellow of the Securities Institute.

This webpage is produced by Coutts for information purposes only and for the sole use of the recipient and may not be reproduced in part or full without the prior permission of Coutts.

The value of investments, and the income from them, can go down as well as up, and you may not recover the amount of your original investment.

Past performance should not be taken as a guide to future performance.

In the case of some investments, they may be illiquid and there may be no recognised market for them and it may therefore be difficult for you to deal in them or obtain reliable information about their value or the extent of the risks to which they are exposed. Where an investment involves exposure to a foreign currency, changes in rates of exchange may cause the value of the investment, and the income from it, to go up or down. Investments in emerging markets are subject to certain special risks, which include, for example, a certain degree of political instability, relatively unpredictable financial market trends and economic growth patterns, a financial market that is still in the development stage and a weak economy.

The information in this webpage is not intended as an offer or solicitation to buy or sell securities or any other investment or banking product, nor does it constitute a personal recommendation. Nothing in this material constitutes investment, legal, credit, accounting or tax advice, or a representation that any investment or strategy is suitable or appropriate to your individual circumstances, or otherwise constitutes a personal recommendation to you.

The information in this webpage is believed to be correct but cannot be guaranteed. Any opinion or forecast constitutes our judgment as at the date of issue and is subject to change without notice. The analysis contained in this document has been procured, and may have been acted upon, by Coutts and connected companies for their own purposes, and the results are being made available to you on this understanding. To the extent permitted by law and without being inconsistent with any applicable regulation, neither Coutts nor any connected company accepts responsibility for any direct or indirect or consequential loss suffered by you or any other person as a result of your acting, or deciding not to act, in reliance upon such information, opinions and analysis.

This document has been produced by Financial Advice & Investment Solutions at Coutts and does not constitute investment research. Neither this document nor any copy thereof may be sent to or taken into the United States or distributed in the United States or to a US person. In certain other jurisdictions, the distribution may be restricted by local law or regulation.