As the race for the French presidency hots up, Sven Balzer takes stock of recent upbeat economic news  and reflects on one of Coutts key investment principles, diversification.

Our key messages this week are:

Little change in the big picture

Most investment markets traded slightly higher last week on the back of supportive economic data. Purchasing manager indices (PMIs) for Europe and the US showed high levels of activity for manufacturing and the ‘global’ PMI, at 53, is at a seven-year high. From this we can argue growth trends continue to broaden, indicating a healthier global expansion.

A quick look back at the first quarter and the bigger picture is relatively unchanged. The over-enthusiasm of investors on the prospects of US tax reform and fiscal stimulus came to a halt after the failure of the Trump regime to repeal the Obamacare bill. However, equity markets had only a very limited pull back on this news despite many investors being extended versus their underlying trend. For the moment, however, cyclical conditions still support a modest equity preference in our balanced portfolios.

Looking ahead, this month will be an important one for the eurozone as the long-awaited French elections will finally start on 23 April. As we have mentioned in previous weekly updates, investors have started to move back into European assets as the potential of a Le Pen victory diminishes. We like EU equities with the positive macroeconomic data in support, and the decline in the political risk premium adds to our confidence.

Similarly, we like emerging markets based on robust economic data, attractive valuations and a slightly weaker US dollar. Against expectations from some investors, this asset class continues to deliver very solid returns in 2017.

The importance of diversification

Alongside cyclical equity holdings, some of our less-cyclical investments have contributed to the diversification of portfolios in recent periods. These are traditional investments, such as UK gilts, but also alternatives such as market neutral or trend-following funds. The majority of these funds had a good start to the year, although we see them mainly as diversifiers in market conditions that are less favourable for equities. Diversification across asset classes remains one of our core investment principles.

Past performance should not be taken as a guide to future performance. The value of investments, and the income from them, can go down as well as up, and you may not recover the amount of your original investment.. 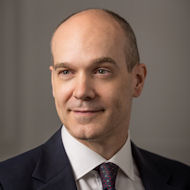 Sven joined Coutts in 2013 and works in the investment strategy team with a focus on asset allocation and investment themes in particular.

Sven has extensive experience in wealth management and capital markets. Prior to Coutts he was the head of Structured Products and Derivatives of Barclays Wealth EMEA. He also worked at UBS Wealth in London and Societe Generale in Paris and Singapore.