Emerging markets are leading producers and consumers of the world’s raw materials, which binds their economies – and investment returns – to commodity prices.

Many of the world’s largest emerging markets (EMs) are leading producers and consumers of raw materials. As a result, their business cycles tend to be highly dependent on fluctuations in the global prices of commodities.

For example, Brazil has an abundance of natural resources. It is one of the top producers of agricultural products, has large reserves of crude oil in offshore basins off the Atlantic Ocean and substantial iron ore resources.

Meanwhile, China – and to a lesser extent India – has surged as an importer of commodities over the past two decades to fuel economic growth. In 1990 China accounted for only 2% of all commodities traded, while the US and Japan accounted for about 15% each. By 2013, China was the leading commodity importer with 15% of global trade, while the US and Japan had fallen to 10% each.

China’s stellar growth in recent years was shared by many emerging economies as they provided the exports to sustain its surge. Yet these same economies have also been affected by China’s periods of slower growth. Indeed, the decline in commodity prices over the past few years and the slowdown of growth in China go a long way to explaining the recent recessions in Brazil.

Commodities include many raw foods and materials used in manufacturing, including wheat, cocoa, coffee, iron ore and copper, as well as the more well known examples of oil and gold. Rather than being bought and sold directly by investors – what are known as ‘spot’ deals – they are commonly traded as futures contracts, standardised agreements between a buyer and a seller to exchange an amount and grade of an item at a specific price and future date.

These can change in value as the price of the underlying commodity rises or falls. But these markets can be volatile because they are susceptible to many unpredictable factors – bad weather can destroy crops and industrial action can shut down a mine.

Since the summer of 2014, there has been a sustained drop in commodity prices, most evidently in energy markets. Some of the decline can be attributed to supply issues. Notably, the newfound abundance of US shale oil and gas, and the resulting fight for market share by the Organization of the Petroleum Exporting Countries (OPEC) have led to plentiful supply and falling prices.

When commodity prices fall, EM shares can become good value. For example, as one of the world’s largest energy producers, Russia’s economy is heavily dependent on oil prices. Across various measures of value, its equity market had become expensive over the past couple of years despite geopolitical risks. Yet Russian equity now looks attractive again following the recent fall in oil prices 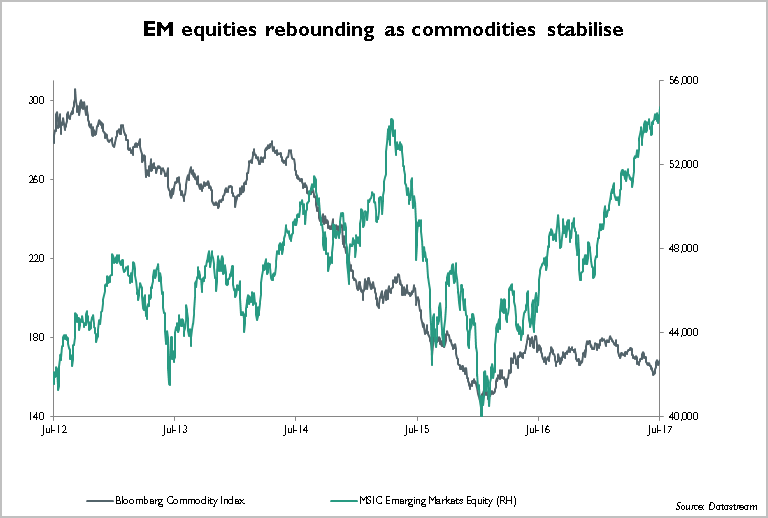 Although the global economy has been enjoying a period of synchronised growth since the start of 2017, Coutts is modestly underweight commodities in general. Investors often turn to gold as a safe haven against rising inflation but we see limited upside to prices.

After large swings over the past 10 years, we expect oil prices to stabilise between $40 and $60 a barrel for the next year or two despite OPEC’s agreement to limit output. This is partly due to the stabilising effects of US shale production, which becomes profitable when prices are around $50.

Over the longer term, the global shift towards clean energy will affect fossil fuel prices. One of the most likely beneficiaries is lithium, which has been labelled “the new gasoline”. This metal is a key component in batteries, which are essential for powering electric vehicles and storing renewable energy on national electricity grids. Demand for lithium will only continue to grow in importance for the foreseeable future, creating potential opportunities for commodity investors.

As major producers and consumers of commodities, emerging market economies are heavily influenced by commodity prices. We have a neutral view on commodities in general, but continue to have a broadly positive view on the long term potential for emerging economies.

4 min read
A change in administration could see a change in market direction for investors.
Read more
4 min read
Investments
|